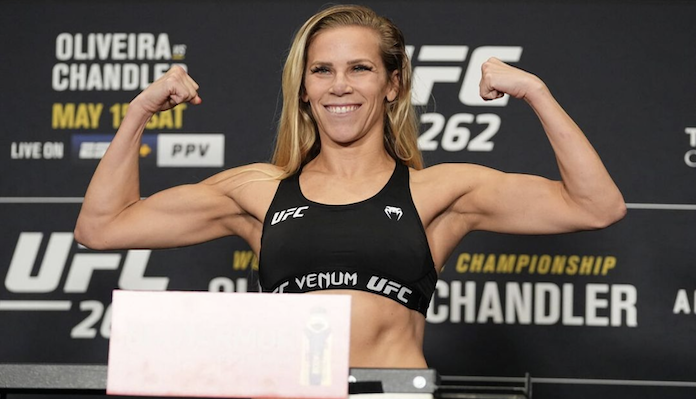 UFC flyweight Katlyn Chookagian is set to test the waters with free agency after the promotion didn’t offer her a new contract.

Heading into UFC Vegas 46 last weekend, Katlyn Chookagian knew she was on the final fight of her deal with the Ultimate Fighting Championship. Many wondered whether or not there had been an attempt to renegotiate prior to Saturday night but regardless of what happened, the 33-year-old still went out there and beat Jennifer Maia via unanimous decision to take her current win streak up to three.

In the post-fight press conference, Chookagian confirmed to the media that the UFC declined to offer her a new contract before the bout had taken place – but insisted that she does want to stay on the roster.

“This was the last fight on my contract, and usually when you have one more, they renegotiate your contract,” Chookagian said. “So when they offered this fight, I’m like, ‘Oh, I’m up for negotiation for a new contract,’ and they were like, ‘Oh no, we want you to fight this [contract] out.’

“That doesn’t necessarily mean they’re going to cut me, but it’s usually not good news. Hopefully with this performance, I’d like to think they want to keep me. I want to stay here. So hopefully I proved that tonight.”

Since the start of 2019, Chookagian has gone on a nice 6-2 run at flyweight with her only defeats coming at the hands of current champion Valentina Shevchenko and former flyweight title contender Jessica Andrade.

Do you expect to see the UFC offer Katlyn Chookagian a new contract? If not, where do you think she’ll end up going and what was your favorite fight during her run with the company? Let us know your thoughts on her future down in the comments, BJPENN Nation!