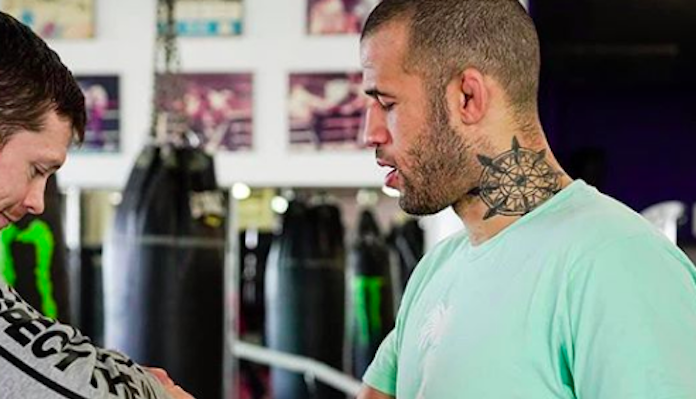 Eric Spicely has been cut from the UFC after he was forced to withdraw from a fight with Markus Perez at the last minute last weekend.

Spicely and Perez were set to collide at UFC on ESPN+ 31, which went down on Saturday at the UFC Apex facility in Las Vegas. Unfortunately, Spicely withdrew from the fight after his weight cut hit a snag.

Speaking on Twitter, Spicely subsequently revealed that his weight cut issues stemmed from a new antidepressant prescription, which he began taking as a result of the head trauma he sustained in a 2019 decision loss to Deron Winn.

“For the sake of transparency this was my first weight cut since starting antidepressants due to the head trauma I sustained in the Deron Winn fight,” Spicely wrote. “Needless to say it went horribly wrong and my fight is off. I will figure this problem out and hopefully be able to compete again.”

Despite there being a fairly clear reason for Spicely’s botched weight cut, he has been cut from the UFC as a result of his failure to show up for his fight.

Spicely alluded to his release on Twitter. His management subsequently confirmed to MMA Fighting that he’s been cut from the promotion.

Alright @ufc this is goodbye again for now. Let’s see if we can do a 3 peat. Sorry to all my fans.

“Alright @ufc this is goodbye again for now. Let’s see if we can do a 3 peat. Sorry to all my fans.”

As Spicely implied in his Tweet, this marks the end of his second stint with the UFC, after initially being released from the promotion in 2018.

Having not fought since his loss to Winn, he says he is desperate for any opportunity to make some money.

I haven’t made money in over a year, needless to say I’ll be ready to fight short notice at 185 or 205. Fuck it

Despite this unfortunate situation, Eric Spicely seems to be taken his UFC release in stride.

“That’s just the way she goes,” he wrote on Twitter.

Do you think the UFC made an error by releasing Eric Spicely after his botched weight cut?