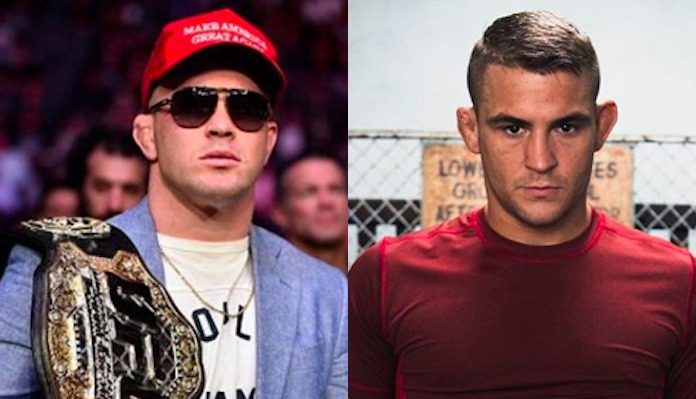 Dustin Poirier has revealed how a grudge match with former UFC interim welterweight champion Colby Covington could come to fruition.

Covington (16-2 MMA) is currently preparing to take on reigning welterweight champion Kamaru Usman at November’s UFC 268 event. With that said, ‘Chaos’ has still found the time to take shots at ‘The Diamond’ throughout his camp.

Colby Covington and Dustin Poirier were once teammates at American Top Team but their relationship quickly turned sour after ‘Chaos‘ parted ways the gym. Since their falling out, Covington has repeatedly attacked Poirier with remarks about his charity and family.

Most recently Colby suggested that if he were to fight Dustin it would probably end in a verbal submission.

“I just see me giving him a wedgie in the Octagon and just slapping him all around the Octagon, throwing him from one side of the cage to the other until he quits. It would probably be a verbal submission.” Colby Covington said of a potential fight with Dustin Poirier. “He’d probably tap out and be the first fighter in a high-profile fight to tap out from being absolutely annihilated. It wouldn’t be competitive, and deep down inside he knows that. But he talked reckless before and I just want to keep him accountable for his words. I’m a man of my word. I don’t just talk the talk, I walk the walk.”

While Dustin Poirier has been relatively quiet in terms of responding to Colby Covington directly, he did share how the grudge match could come to fruition during a recent interview with ESPN.

“Of course I would!” Poirier responded when asked if he would entertain a super-fight with Usman or Covington is he wins the lightweight title. “Those are some big guys, man. Those are some big guys. But we’ll see. I definitely think I can fight at 170. Honestly, now at ‘55, my metabolism’s kind of caught up. When I was cutting to 145, between fights, I would get a lot heavier than I do now. I just think my body, my metabolism was getting messed up and holding on to a lot of weight. I would shoot up to 190 when I was fighting ‘45. Now, I don’t even get past ‘82 is kind of the max I  really walk around at. But I think I could fight at 170 as well.”

Would you like to see a super fight between Dustin Poirier and Colby Covington if both men emerge victorious in their upcoming title fights?