Daniel Rodriguez praises Li Jingliang’s punching power following war at UFC 279: “He rocked me almost every time he hit me”

Daniel Rodriguez may have walked away with the split decision in his battle with Li Jingliang at UFC 279, but ‘The Leech’s’ power seemed to leave quite an impression on ‘D-Rod.’

The Chinese fighter caught the American with some big shots and appeared to have the better of the exchanges in their 180lb catchweight battle at T-Mobile Arena earlier this month. So much so, that numerous industry figures including Dana White and Jingliang himself have suggested the result was a robbery.

Jingliang felt so aggrieved that he even appeared on the MMA Hour wearing a t-shirt with the words ‘ROBBED’ written on it.

Rodriguez asserting that he was constantly getting rocked by the Legend FC veteran has added credence to that theory. Speaking to Hong Kong Fighter Sasha Palatnikov in the wake of the win, Rodriguez said,

“He rocked me almost every time he hit me. I was like, ‘What the fu*k just happened?’ Like I was blacked out. I was like, ‘Holy fu*k.’ That happened twice. Three times I was like, ‘where am I?’” explained the 35-year-old. 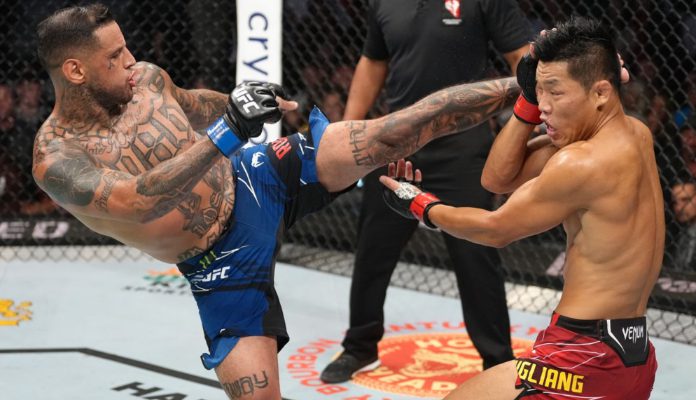 It was a week where things refused to go Jingliang’s way. Having missed out on a blockbuster clash and arguably, a more winnable fight against fellow 170lb-er Tony Ferguson, he was forced to take on the less-heralded and much bigger Rodriguez. With the press conference getting cancelled due to the infamous backstage scuffle between Kevin Holland, Nate Diaz and Khamzat Chimaev and teams, Jingliang was also robbed of the chance to show off his special suit. To top it off, the 34-year-old lost his place in the rankings.

Things have been going rather better for Rodriguez. The former Bellator man usurped Jingliang’s #14-spot in the top-15. He’s currently riding a 4-fight winning streak and is now 7-1 inside the Octagon.

However, with so many detractors from his recent win, Rodriguez is keen to run it back with Jingliang and out the doubters to bed.

In the wake of the criticism, the Californian took to Instagram to lay down a challenge for another go.

Would you like to see Jingliang and Rodriguez run it back?

This article appeared first on BJPENN.COM
- Advertisement -
This article appeared first on BJPENN.COM
Previous articleAnderson Silva expresses desire to have his last fight take place in Japan: “It completely makes sense because I start fight my professional career in Japan”
Next articleJoe Rogan reveals he and Dave Chappelle were removed from their seats during Canelo vs. GGG 3