‘The Leech’ was set to face Tony Ferguson at UFC 279 last Saturday. The bout was expected to be the biggest showcase of the Chinese fighter’s career to date. However, after both men made weight for their welterweight fight, everything got turned upside down.

Khamzat Chimaev, who was set to headline the pay-per-view, badly missed weight last Friday. After his terrible weight miss, his opponent, Nate Diaz, refused to fight him. As a result, the UFC decided to change the card around.

At UFC 279, the two welterweights put on a back-and-forth fight. At the end of the three-round duration, most fans and pundits thought Jingliang deserved the win. Instead, Rodriguez earned the victory by a split decision.

The loss was just another part of a terrible weekend for Li Jingliang. The Chinese fighter discussed UFC 279 in an interview on The MMA Hour with Ariel Helwani. There, Jingliang blasted the decision, and also discussed how tough the weekend was for him. 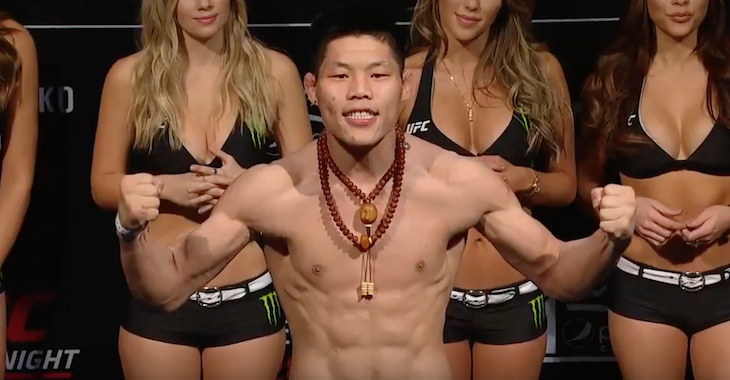 “It’s a robbery. Last Saturday was an awful Saturday to me. Awful. All the athletes, all the fighters on this card prepared for these fights very seriously, but [there was] a lot of chaos during the last week. I think it’s a terrible situation.” (h/t MMAFighting)

He continued, “I made weight. Tony made weight. Why don’t [they] let us fight? It’s not our fault. So why? Tony fought Nate as the main event — why don’t they let me fight Nate? It’s unfair. I cannot accept that.”

Jingliang continued, “The only option I have at that time [was Rodriguez]. I did everything I should do. I made weight and was ready for the fight. But they missed weight, they fought backstage. So why did they [make] me take this responsibility and change my opponent? I don’t think it’s fair.”

What do you think about Li Jingliang’s comments? Sound off in the comment section below!

This article appeared first on BJPENN.COM
- Advertisement -
This article appeared first on BJPENN.COM
Previous articleDaniel Cormier disagrees with Tony Ferguson saying he’s back after Nate Diaz loss: “His decline now has been very steep”
Next articleRobert Whittaker interested in training with Khamzat Chimaev, wants to see him move to middleweight: “He handles a lot of the guys in the division”