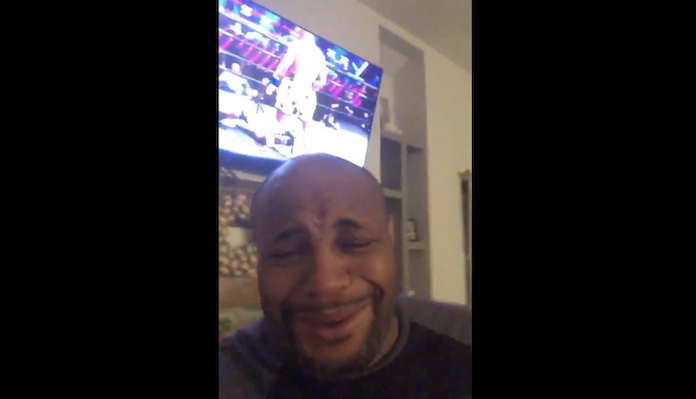 As part of International Fight Week, Daniel Cormier was inducted into the UFC Hall of Fame after years of success with the promotion. In addition to becoming a two-weight world champion, he also managed to defeat some big names throughout his run including Stipe Miocic, Derrick Lewis, Anderson Silva, Alexander Gustafsson, Anthony Johnson and more.

In a rematch with the latter back in 2017, however, Cormier found himself in a spot of bother before he even got to fight night after being accused of using a towel to help him make weight.

Cormier refuted the claims for quite some time but during his induction speech this week, he couldn’t help but come clean.

“I want to tell you something because I feel like right now is the time to be completely transparent. I think I may have grabbed the towel in Buffalo. Rumble, I’m sorry my guy.”

We can’t imagine it’s an apology that’ll go down particularly well but at this stage of their respective careers, we think it’s probably just water under the bridge.

The popular opinion is that Cormier would’ve been able to go on and win the fight regardless, in a similar manner to what Charles Oliveira did against Justin Gaethje earlier this year, but it’s quite a funny anecdote for the 43-year-old to reveal on such a big stage.

Moving forward, you’d have to imagine more and more commissions are going to be keeping an eye on the guys and girls attempting to pull the same trick – ‘The Cormier’, if you will.

What do you think about Daniel Cormier revealing that towelgate was true? Did you enjoy the UFC Hall of Fame induction ceremony and do you agree with Cormier going in?