Dana White has reacted after news broke that former UFC welterweight Mike Perry has inked a multi-fight deal with BKFC.

‘Platinum’ (14-8 MMA) fought out his UFC contract back in April, suffering a unanimous decision loss to Daniel Rodriguez. The setback marked Perry’s second in a row, and fourth in his past five fights overall.

After taking a few months to weigh his options, MMAFighting announced on Tuesday that Mike Perry had signed a multi-fight deal with BKFC (Bare Knuckle Fighting Championship). The financial details of Perry’s new contract were not released by the promotion.

UFC President Dana White was asked to comment on Mike Perry signing with BKFC during last night’s Contender Series post-fight presser. White revealed that ‘Platinum’ was not released by the Ultimate Fighting Championship, but instead fought out his existing contract and then signed a deal with the BKFC.

“His contract had expired (with the UFC). Mike Perry is a fun fighter, I mean he’s had so many fun fights here.” White said. “I wish him the best.”

Perry went 7-8 during his five-year stretch fighting for Dana White and the UFC. During that time the fan-favorite welterweight earned knockout victories over Hyun Gyu Lim, Danny Roberts, Jake Ellenberger and Alex Reyes. 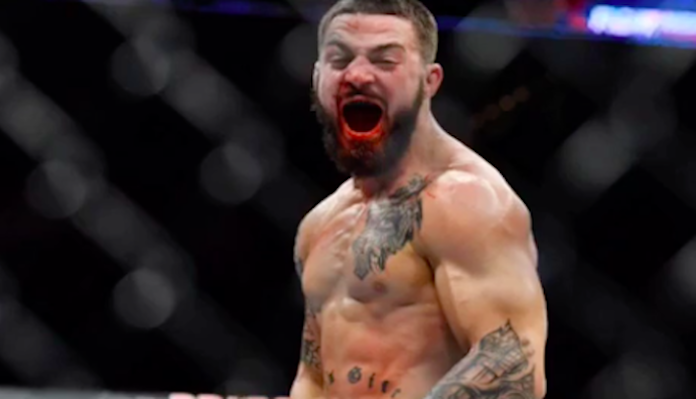 ‘Platinum’ is clearly looking forward to getting his feet wet in the sport of Bare Knuckle boxing.

“Let’s skip all the formalities! This sport is evolving and I am here to strike fear into the hearts of my competitors!” Mike Perry said in a press release. “I plan to intimidate the world when I show what a truly skilled combat specialist is capable of with his bare hands. I will dismantle the opposition and reach the glory I have longed for my entire life.”

What do you think of Dana White’s reaction to Mike Perry signing with the BKFC? Share your thoughts in the comment section PENN Nation!