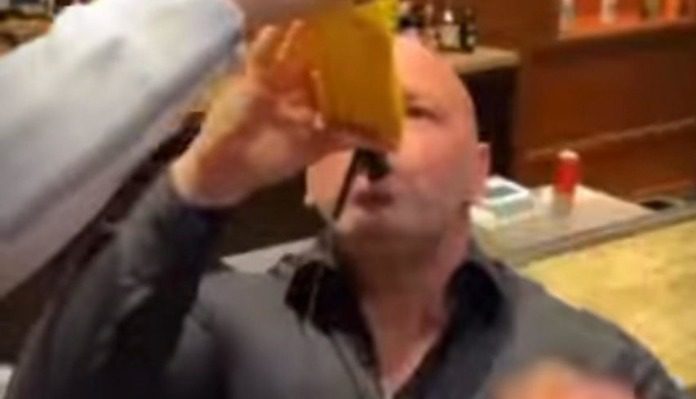 Dana White stuck to his word and did a shoey.

At the UFC 271 pre-fight press conference, Tai Tuivasa brought out his ShoeyVasa product and White said he would do a shoey. However, the press conference ended without the UFC boss doing a shoey so after Tuivasa knocked out Derrick Lewis at UFC 271, White decided the time was right to make the move.

White admitted he didn’t know how to do one but Tuivasa helped him figure it out and the UFC boss did the shoey.

Tuivasa then spoke to the media after his win over Lewis and praised Dana White for doing the shoey.

“He f*cking did alright, actually,” Tuivasa said in his post-fight press conference. (h/t MMAFighting). He was fine. He downed the whole thing too. He did well…. I feel good, even better that the boss did a shoey out of my ShoeyVasa. It’s a win-win for me.”

Tai Tuivasa created the ShoeyVasa product so fans can do shoeys without having to use a real shoe. It is now available to purchase and it now has a promo video from White using it to help the sales.

Tuivasa is riding a five-fight winning streak and as mentioned, is coming off the KO win over Lewis at UFC 271. Prior to that, he knocked out Augusto Sakai, Greg Hardy, Harry Hunsucker, and Stefan Struve. With the win over Lewis, Tuivasa is right in the title picture but says he doesn’t care what is next for him. For now, he’ll be focused on selling his ShoeyVasa and partying.

“I don’t even know the f*ck’s in the top five,” Tuivasa said. “I don’t even watch fighting, bro. I heard there’s the Stipe’s and the Ciryl Gane’s and all that and everyone up there… “I don’t mind being the guy who drinks piss out of shoes and this and that. I suppose everyone just focused on this and that, but at the end of the day, I’m knocking the best in the world out.”

What do you make of Dana White doing a shoey after UFC 271?