Dan Hardy is interested in running things back with Carlos Condit.

Hardy and Condit fought back in 2010 at UFC 120 in England with Condit winning by first-round knockout. It was also the only time Hardy was knocked out and as he hints at a return, he is interested in making his comeback fight against Condit.

“Yeah, of course. He looked great the other night and that’s really what I wanted to see from him, because I genuinely do believe that he’s up there with the Nick Diaz, (Jorge) Masvidal kind of guys in this division. He’s a lethal individual, he’s a Natural Born Killer,” said to the media before UFC Fight Island 5. “He’s a great striker, he’s very unorthodox, and he’s back in a place psychologically, as well as physically, where he looks like he can have some good fights. Who would not want payback for the only person that knocked them out? Absolutely.”

Dan Hardy has not fought since 2012 when he defeated Amir Sadollah. Hardy was diagnosed with Wolff–Parkinson–White syndrome in 2013 leaving him unable to fight. Yet, in 2018 the Englishman announced he was cleared to compete again and in 2019 said he has joined the USADA testing pool.

In his career, Hardy does have notable wins over Duane Ludwig, Daniel Weichel, and Mike Swick among others. 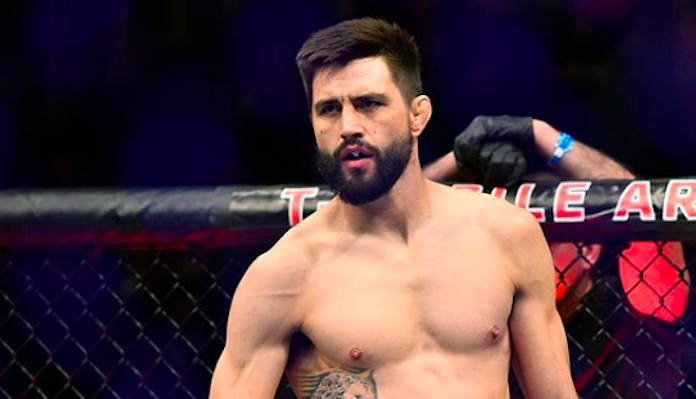 Carlos Condit, meanwhile, returned to the win column at UFC Fight Island 4 with a decision win over Court McGee. It was his first win since 2015 after dropping five straight to Robbie Lawler, Demian Maia, Neil Magny, Alex Oliveira, and Michael Chiesa.

Whether or not Dan Hardy will actually come back is to be seen. It has been something he has been talking about for years. Yet, a rematch with Carlos Condit certainly makes sense.

Would you want to see Dan Hardy return to rematch Carlos Condit?

This article appeared first on BJPENN.COM
Previous articleMichael Chandler slams Tony Ferguson for turning him down at UFC 254
Next articleTony Ferguson sends a fiery message to Khabib Nurmagomedov & Justin Gaethje: “My mat, my f*****g time”
© Newspaper WordPress Theme by TagDiv