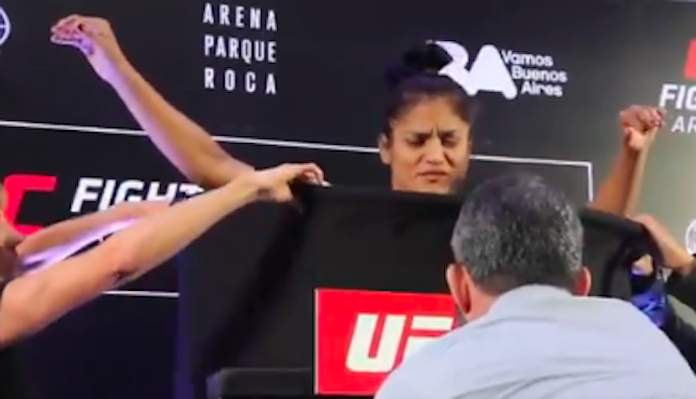 Cynthia Calvillo’s attempted weigh-in for UFC Argentina could only be described as freightening.

The UFC women’s strawweight fighter, Calvillo, could barely make the walk to the weigh scale and almost fell off just seconds after she finally got on (watch).

The 31-year-old eventually weighed in 2-pounds over the women’s strawweight non-title fight limit of 116-pounds and then was immediately escorted back to the locker room area to rehydrate.

It was a very concerning scene, one which caused a plethora of UFC Fighters to chime in on social media.

Despite the scary-looking weight cut, the Brazilian Athletic Commission announced that Cynthia Calvillo will still be allowed to compete at tonight’s UFC Argentina event against Poliana Botelho.

Calvillo will be forced to give up 20% of her fight purse due to the weight hiccup, a percentage which will eventually find the pockets of her UFC Argentina opponent Poliana Botelho.

“Basically what happened is I started my period this week,” Calvillo told MMAFighting after weighing in at 118 pounds. “We were kind of prepared for it, because we could feel the symptoms, but unfortunately this morning when we got up it was about 5:30 and I had two pounds to go. Then, I couldn’t cut any weight at all from 5:30 to 8 a.m. We tried everything and I could not break a sweat. Even when I got up to the scale, I was the same weight that I woke up at 5:30 in the morning.”

Cynthia Calvillo went onto revealed that the commission for UFC Argentina actually told her to stop cutting weight.

“They decided to go ahead and stop me from continuing cutting the weight at 9 a.m.,” Calvillo said. “They didn’t want to make me suffer more so that I was still able to fight. So, that’s basically what happened. Unfortunately, we tried to prepare the best for it, but my body was just not sweating due to having to retain the water because of my period.”

How do you think Cynthia Calvillo will fare at UFC Argentina following her devastating weight cut?