The UFC’s former women’s bantamweight champion, Holm (13-5 MMA), had entered tonight’s contest looking to build off the momentum from her unanimous decision victory over Raquel Pennington back in January. Prior to defeating ‘Rocky’ in Las Vegas, ‘The Preachers Daughter’ was coming off a knockout loss to reigning women’s champ-champ Amanda Nunes at UFC 239.

Holly Holm and the above mentioned Cris Cyborg have a history having previously met under the UFC banner in December of 2017. That evening in Las Vegas, Cyborg emerged victorious by way of unanimous decision thus retaining her featherweight gold. So it was no surprise to hear the now-Bellator champion was tuning in for tonight’s UFC event headliner. 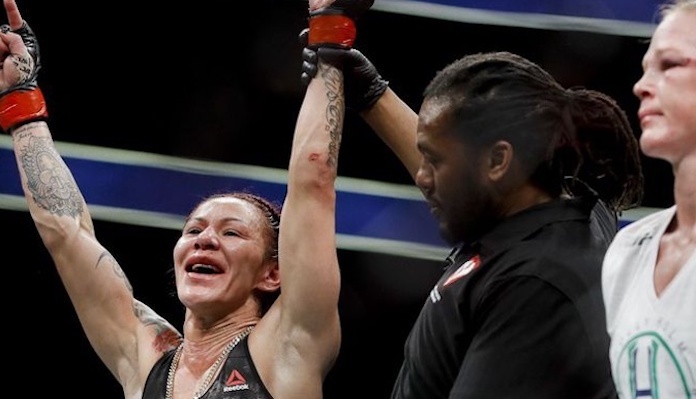 With that said, tonight’s UFC Fight Island 4 headliner proved to be a very one-sided affair. Holly Holm was able to batter Irene Aldana with a plethora of different strikes for the better portion of five rounds, this while landing some timely takedowns, ultimately earning a unanimous decision victory.

Check out how Cris Cyborg reacted to Holm defeating Aldana below:

Impressive seeing @HollyHolm who is nominated for this years @BoxingHall inductions pick up a perfect 5 round win in MMA!

“Impressive seeing Holly Holm, who is nominated for this years Boxing Hall of Fame inductions, pick up a perfect 5 round win in MMA!”

Who would you like to see Holly Holm fight next following her dominant decision victory over Irene Aldana this evening on Yas Island? Share your thoughts in the comments section PENN Nation!

This article first appeared on BJPENN.com on October 4, 2020