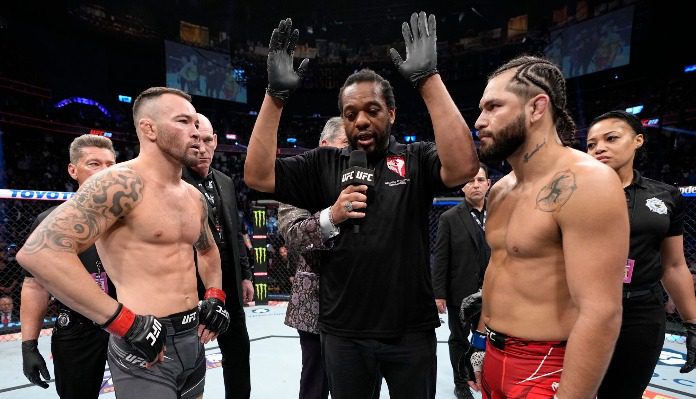 The altercation between Colby Covington and Jorge Masvidal in Miami was chaotic enough for an off-duty police officer to request multiple units.

It was at UFC 272 on March 5th of this year that the two welterweights collided. Covington (17-3 MMA) defeated Masvidal (35-16 MMA) in a five-round fight that went the distance.

Just over 2 weeks after their fight in the Octagon, Masvidal took it to the streets, apparently attacking Covington when he was coming out of a restaurant, causing bodily harm as well as damage to his Rolex.

The alleged assault took place outside of Papi Steak House in Miami and now TMZ Sports has procured audio of the 911 call requesting multiple units.

The off-duty cop who placed the call can be heard in the audio telling the dispatcher, “Can we send a bunch of, or a few units…” He later added in the call, “If you could just send units on a three, please.”

Jorge Masvidal was arrested by the Miami Beach police on March 23rd, but posted a bond of $5k and was subsequently released. Masvidal entered a written not guilty plea to single counts of aggravated battery resulting in great bodily harm and criminal mischief.

Do you believe Jorge Masvidal will beat the charges against him or do you think he should be headed to jail for allegedly attacking Colby Covington? Share your thoughts in the comment section PENN Nation!