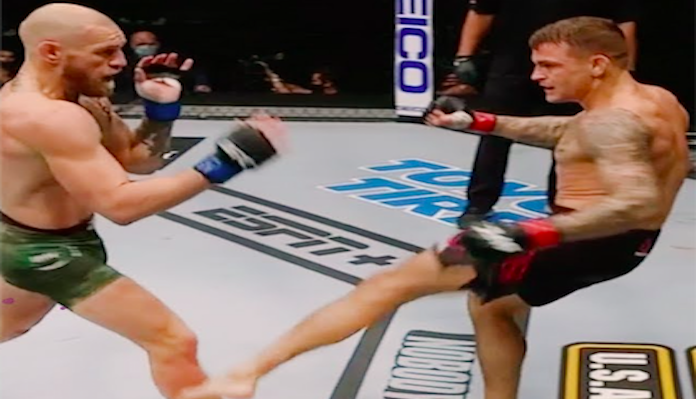 UFC superstar Conor McGregor says he could hear Thiago Alves in the corner of Dustin Poirier encouraging him to kick his legs.

McGregor was knocked out by Poirier in the second round of their fight with punches, but all those nasty low kicks Poirier landed before the finishing blows contributed to the knockout. The Irishman’s mobility became severely limited from the low kicks and they directly contributed to the win. Poirier, of course, comes from American Top Team, where many fighters utilize leg kicks to great success. One of ATT’s most notorious low kickers was Alves, the former UFC welterweight who is now a coach.

When Alves was in his prime a decade ago and fighting GSP for the UFC welterweight title, one of his top weapons was his blistering low kicks, which many considered to be the best in the game at one point. It’s no surprise, then, that he was actively encouraging Poirier to kick McGregor while in his corner at UFC 257. Speaking to the media following the event, McGregor said that he could hear Alves talking about Poirier landing the low kicks, and admitted that the comments were getting to him.

“One of the calf kicks sunk in early and Thiago Alves said, ‘That was a good one.’ I was thinking in my head, ‘You bastard, it was a good one,'” McGregor said.

While McGregor looked comfortable from boxing distance in the first round, once Poirier started landing the low kicks the tide of the fight began to greatly swing in his favor. Low kicks have become one of the top weapons in the game for MMA fighters over the past half-decade, and McGregor will have to check them in a potential trilogy. Knowing McGregor, don’t expect him to make the same mistake again.

Do you think Conor McGregor will be able to make the necessary adjustments to stop the low kicks of Dustin Poirier in a potential trilogy fight between the two rivals?