Colby Covington’s sister Candace was in attendance at Madison Square Garden to watch her brother fight Kamaru Usman for a second time.

Covington (16-3 MMA) and Usman (20-1 MMA) had originally collided back at UFC 245 in December of 2019, with the ‘Nigerian Nightmare’ emerging victorious via a thrilling fifth round TKO.

Since that time, Kamaru Usman went on to defend his welterweight title on three occasions, stopping Jorge Masvidal and Gilbert Burns in his most previous efforts. In addition, the Nigerian champion also taunted ‘Chaos’ by liking a number of his sisters posts (see that here).

Meanwhile, Colby Covington was returning to action for the first time in thirteen months this evening at UFC 268. In his most previous effort, ‘Chaos’ had  earned a fifth round TKO victory over Tyron Woodley. 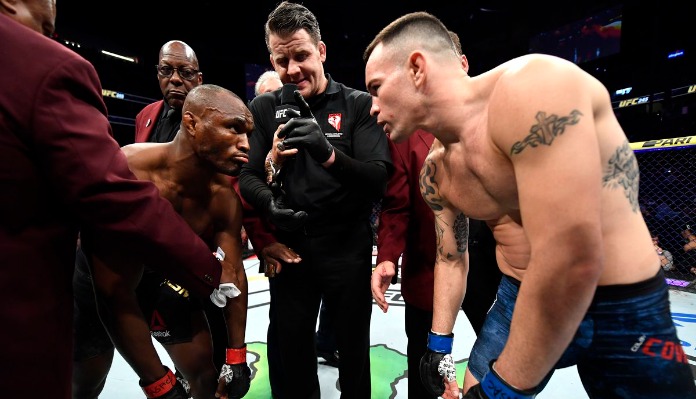 Tonight’s UFC 268 main event rematch proved to be another thrilling war. Kamaru Usman was able to get off to a strong start in the fight and wound up dropping Colby Covington on two occasions in the second round. However, ‘Chaos’ stormed back in rounds three and four, leaving many (including Candace Covington) to believe the fight was tied 2-2 after twenty minutes. The final five minutes resulted in another competitive round and following the final buzzer Usman and Covington couldn’t help but to show some respect to one another.

Check out how Candace Covington reacted to Colby’s second career setback to Usman below:

“It doesn’t feel like we lost… everyone KNOWS and WATCHED who the real Champ is!!” – Candace shared on Instagram Live.

“I am so SOOO Proud of my brother tonight AND for breaking Usman’s zero takedown Stat! Now who’s the KING?” – Candace wrote in a second post.

For his part, Covington believes he did enough to win Saturday’s rematch with Usman. ‘Chaos’ told reporters at the UFC 268 post-fight presser that he thought he won three rounds over Kamaru at MSG.

What was your reaction to Usman vs. Covington 2?