Following his impressive victory over “RDA”, it was expected that Colby Covington would compete in a title unification bout with reigning division champion Tyron Woodley in his next octagon appearance.

Unfortunately for “Chaos“, he was later stripped of his interim title, this after he was unable to compete against Tyron Woodley at UFC 228. At the time, Covington was recovering from nasal surgery, a procedure which ultimately prevented him from being able to compete at one hundred percent.

“The Chosen One” would go on to fight Darren Till in the headliner of September’s pay-per-view event in Dallas. A fight in which Woodley ultimately proved victorious by way of second-round submission. 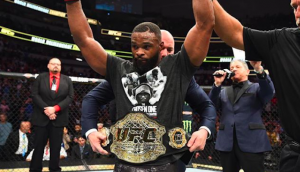 Since then, Tyron Wooldey has also been forced on the shelf, this after he required surgery to repair a hand injury suffered in his fight with Till.

That news did not sit well with Colby Covington, who is now demanding that the UFC live up to their promises.

“I’m big into being a man of my word and promises made, promises kept. I expect the same in return from the UFC,” Covington said in a recent interview with MMAjunkie. “They promised me Tyron Woodley and a fight for the undisputed belt. Since that belt is disputed by me currently, that’s all I’m accepting. Doesn’t matter if it’s Mickey Mouse with the belt – then that’s who I want.”

“‘Tyquil’ and I have unfinished business,” Covington continued, “and I deserve and have earned the right to fight for the undisputed title.”

Do you think the UFC should book a fight between bitter rivals Colby Covington and Tyron Woodley next? Sound off in the comments section PENN Nation!