It appears that Dana White is now willing to move on from a previously targeted welterweight title fight between Colby Covington and Tyron Woodley.

Woodley vs Usman… @danawhite doesn't mind the sound of that 👀. pic.twitter.com/W8IYwFFEaW

Following the conclusion of last night’s TUF 28 Finale main event, UFC President Dana White joined the UFC on FOX crew to discuss Usman’s big win and what might be next for “The Nigerian Nightmare“.

Former UFC middleweight champion Michael Bisping asked Dana White if Colby Covington vs. Tyron Woodley was still the plan, and if so when that fight is likely to happen.

“I don’t have any answers yet. You know, this thing (Usman vs. Dos Anjos) just happened three minutes ago Mike. Let me get home and figure this thing out.” Dana White said with a laugh. “But no seriously, it was a great fight. Covington is obviously there. But I’m one of these guys man, I always like – if you just fought and are coming off a dominant performance against a stud, like ‘RDA’, I’m looking at you. Covington hasn’t fought in a while. He got injured. He didn’t defend his title. You know, all that stuff. Listen, in one fight Usman, look I used to talk a lot of smack about Usman. But in one fight this guy turned me around. And now that makes me excited to see the Woodley fight.”

“Yea we will see. You’re right. There is obviously lots of good options out there (for Usman). But after seeing what I just saw, all I can think of right now is Tyron Woodley.” 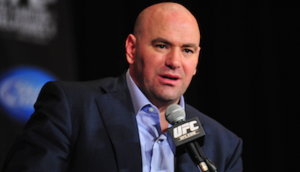 Tyron Woodley was last seen in action at September’s UFC 228 event, where he scored a second-round submission victory over the previously undefeated Darren Till.

Since capturing the UFC welterweight title by destroying Robbie Lawler in the main event of UFC 201, “The Chosen One” has defended his coveted welterweight title on four occasions against opponents Stephen Thompson (2x), Demian Maia and the aforementioned Darren Till.

Meanwhile, Colby Covington was last seen in action at June’s UFC 225 event where he scored a unanimous decision victory over Rafael dos Anjos to capture the UFC’s interim welterweight title.

Do you agree with UFC President Dana White, is Kamaru Usman vs. Tyron Woodley now the fight to make at welterweight? Sound off in the comments section PENN Nation!