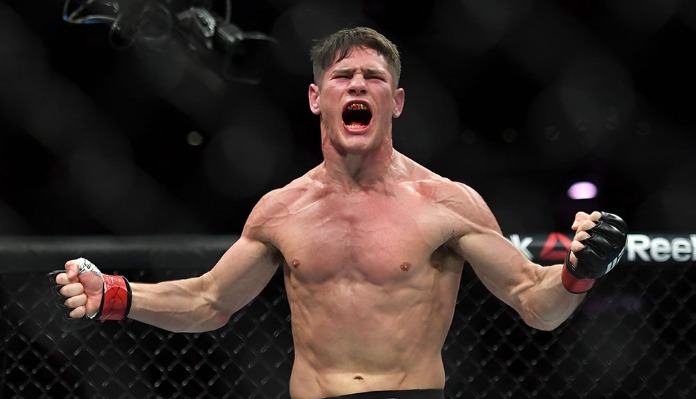 Charles Rosa wanted to fight in front of fans in his next fight and he got his wish.

Rosa has fought six straight times in front of no fans and after his latest effort, he told his manager and the UFC that he wanted to fight in front of fans again. He ended up getting his wish, as on about five weeks’ notice he got the call to face Nathaniel Wood at UFC London.

“They called and I answered. I have 13, 14 fights in the UFC and I have never said no. My last fight was on two days’ notice against TJ Brown,” Rosa said on Just Scrap Radio on BJPENN.com. “They call and I answer and I’m not ducking anybody but the one thing I told my manager was, I’m not fighting without a crowd again, I’m not fighting back at the Apex.”

Although not many fighters want to go into enemy territory, Rosa is embracing the challenge. He has a ton of confidence as he believes the fact Wood is moving up to featherweight won’t be good for him.

Charles Rosa points to the fact Wood got knocked out by John Dodson at 135lbs, which is only giving the Boston native confidence.

“I love the matchup, he’s a little guy, he’s 5’6″. I know when I spar I always do well against little guys,” Rosa said. “I neglect my jab in a lot of fights because I’m fighting bigger guys which won’t be the case here and then as far as strength, he’s not going to be stronger than me…

“I’m smashing this kid’s face in. He’s fighting in front of his friends and family there is a lot of pressure on him,” Rosa later added. “The best case for him is he survives the 15 minutes and gets a Fight of the Night bonus for surviving.”

Rosa also enters the fight on a two-fight losing skid and could be fighting for his job on Saturday. However, he isn’t focused on that, instead, he is just focused on winning and proving he is one of the best fighters.

“I’m trying to win every fight. My last two fights are the first time I’ve lost two in a row, but that’s on the UFC, if they want to let me go and have me get more money from another promotion, it is what it is,” Rosa concluded. “The UFC has taken care of me, they have taken care of two neck surgeries and I want to be part of the UFC.”

Do you think Charles Rosa will beat Nathaniel Wood at UFC London?