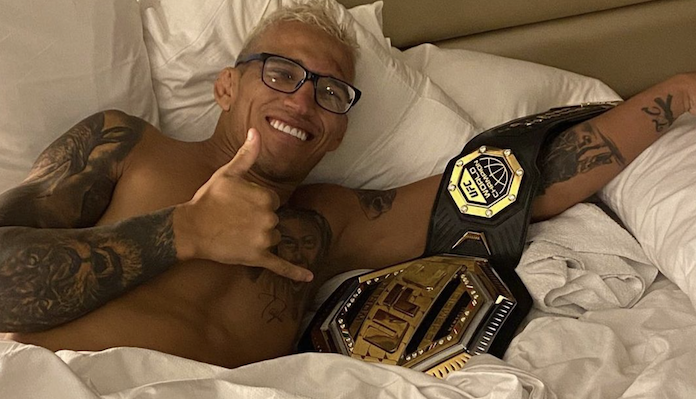 UFC lightweight champion Charles Oliveira has created a poll to see who fans want to see him fight next, Conor McGregor or Justin Gaethje.

Oliveira (32-8 MMA) successfully defended his 155lbs title for the first time last month at UFC 269 when he submitted Dustin Poirier with a rear-naked choke in round three (see that here).

Prior to that contest, UFC President Dana White had insinuated that Justin Gaethje would be receiving the next title shot at 155 lbs.

However, after ‘Do Bronx’ forced ‘The Diamond’ to tap out in Las Vegas, he seemingly turned his attention to a possible ‘red panty night’ with former two-division champion Conor McGregor.

“If I had the chance to fight Conor for money today, I would. The belt is mine and continues being mine. We’ll continue building our legacy and making history.” Oliveira said. “Of course, no one’s a fool. ‘No, I’ll fight someone else because of the belt, leave Conor alone’ — who’s going to do that? Only a fool,” Oliveira said. “If I had the opportunity to fight Conor, I would definitely fight Conor. The belt is mine regardless. The division has to get by and wait a little bit. There’s nothing else to do. We have to think about our families, our children, think about what we can do down the line.”

The notion that Charles Oliveira would be open to letting Conor McGregor ‘skip the line’ did not sit well with Justin Gaethje who shared the following reaction with TMZ:

“He [McGregor] is so irrelevant. He has not won a fight since 2016 in the lightweight division. I’m ranked number one, I saw they updated the rankings, I’m number one now – that feels pretty good. Congratulations, thank you sir, appreciate that, let’s go! I’m fighting for the belt, man. My whole life I’ve been working towards this, that is what’s next. If not, I’ll f***ing burn it down, it doesn’t matter. I will show up and start throwing dollies everywhere, I don’t know what the answer is.”

Now it appears that Justin Gaethje’s title hopes will rest in the hands of fight fans, as Charles Oliveira created a poll to decide who he will fight next.

“Let’s start the year with this poll, who would you like to see fight with me?” Charles Oliveira posted on Instagram.

Who would you prefer to see Charles Oliveira fight next, McGregor or Gaethje? Share your thoughts in the comment section PENN Nation!