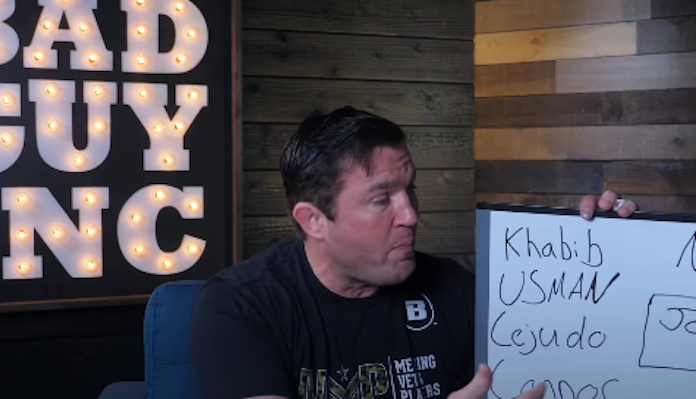 Former UFC and Bellator star Chael Sonnen has unveiled his pound-for-pound rankings, and they’re bound to stir up some debate.

Sonnen unveiled his rankings on his official YouTube channel.

Sonnen has placed Khabib Nurmagomedov at No.1, on the basis that Nurmagomedov is undefeated and the champion of the lightweight division, which is viewed as the deepest division in the sport.

Sonnen admits that he struggled to fill his No.2 spot, debating between welterweight champ Kamaru Usman and bantamweight champ Henry Cejudo, but ultimately gave it to the former. His argument is that Usman has fought better opposition—contrary to Cejudo’s wins over greats like Demetrious Johnson, TJ Dillashaw and Dominick Cruz—and that he’s been more dominant in his fights.

With Usman at No. 2, Cejudo settled in at No. 3 on Sonnen’s list. Conor McGregor, meanwhile, got the No. 4 spot on the list. Sonnen explained that he placed McGregor on his list because he’s won titles in multiple weight classes, and competed admirably in boxing.

Sonnen gave his No. 5 spot to Amanda Nunes, who currently holds the UFC women’s bantamweight and featherweight titles. His main argument for Nunes’ position on his list seemed to be her famous destruction of Cris Cyborg.

Sonnen refrained from putting UFC light heavyweight champion Jon Jones in his top-5, but gave Jones a nod as one of the “toughest” fighters ever.

What do you think of this list from Chael Sonnen?