Chael Sonnen explains why Jack Hermansson’s post-fight apology at UFC London was potentially risky: “I did it once, I slid down the card”

UFC London saw Jack Hermansson (23-7 MMA) vs Chris Curtis (29-9 MMA) battle it out this past Saturday, July 23rd at the O2 Arena. It was Hermansson who handed Curtis his first Octagon loss, scoring a unanimous decision win.

Speaking at the post fight press conference, Hermansson had this to say:

“I think he got frustrated with me moving, moving, moving. I just try to stay disciplined and stick to my plan. I could see the frustration in him.”

Continuing to speak about sportsmanship, and ultimately apologizing Hermansson continued:

“I can’t remember but he was like taunting me. Then, something slipped from my tongue. I’m a little bit disappointed with myself there that I got caught up in that because I’m all about sportsmanship. I want the sport to be clean and after the fight, we should be good friends. I really apologize to Chris Curtis for that.” 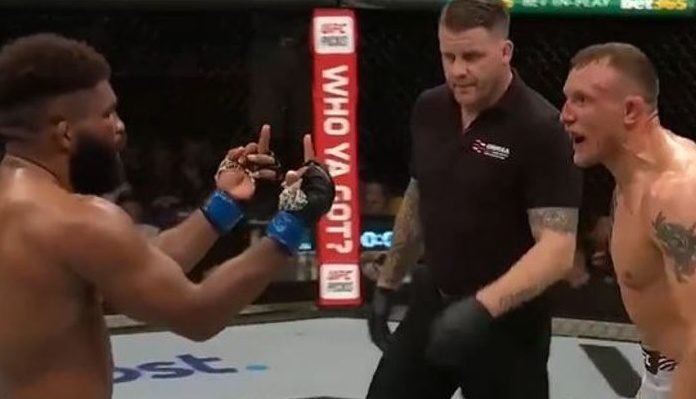 Chael Sonnen, speaking on ‘Bad Guy Inc.’ is not so sure Hermansson made the right decision with his post fight apology saying:

“Jack was talking about hey ‘I’m sorry, I apologize’. And I can’t accept the apology because I don’t know what he was sorry for. I believe it was for action or inaction. I believe. But is that something that’s your fault. If you’ve got two guys in there fighting, how would how would it lend that one of them, who did a better job by the way, and got his hand raised was at fault.”

Continuing Sonnen described what fun he had at the O2 Arena:

“I had a lot of fun! That was a really good card. I thought that British crown, they are something special.”

Do you agree with Chael Sonnen that a professional should not be apologizing at a post fight press conference, regardless of the reason?

This article appeared first on BJPENN.COM
- Advertisement -
This article appeared first on BJPENN.COM
Previous articleKhabib Nurmagomedov says he has “goosebumps” in anticipation for Islam Makhachev vs Charles Oliveira: “Someone reads history, and someone writes it. Prepare your excuses.”
Next articleDana White shares how he reacted to the Sean O’Malley vs Petr Yan fight booking: “I said are you out of your goddamn mind?”