Amanda Nunes has responded after Julianna Pena suggested that she should be considered the first ever “Mom Champ” in UFC history.

Nunes (21-5 MMA) put her bantamweight title on the line against Pena (11-4 MMA) in the co-headliner of last weekend’s UFC 269 pay-per-view event.

The bout proved to be a wild and absolutely thrilling affair. Amanda Nunes and Julianna Pena went to war exchanging heavy punches and kicks inside of the pocket. After a close first round, Pena began to turn the tide in her favor early in round two. She eventually rocked ‘The Lioness’ after landing a flurry of strikes and got the fight to the ground. From there, ‘The Venezuelan Vixen’ promptly locked in a fight-ending rear-naked choke (see that here). 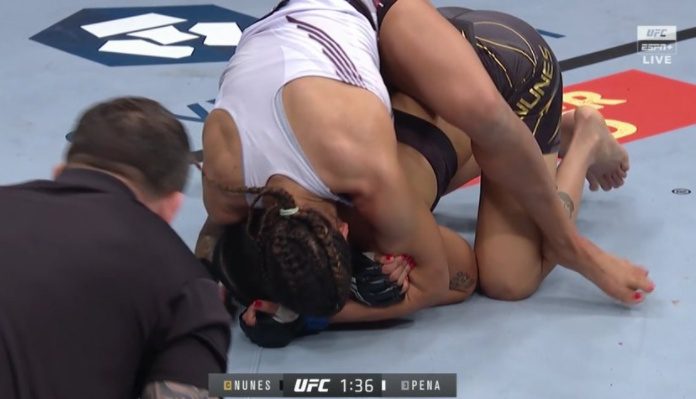 It was a shocking upset, one that rivaled Matt Serra’s title earning victory over Georges St-Pierre.

After dethroning Amanda Nunes of her 135lbs title, Julianna Pena explained why she should be considered the first “mom champ” at the UFC 269 post-fight press conference.

“All respect to her, but I gave birth to my daughter,” Pena said. “There should be a ‘baddest mom on the planet belt’ if you ask me.”

Those comments clearly struck a nerve with Amanda Nunes, as she proceeded to scold ‘The Venezuelan Vixen’ in the following post on Instagram.

“I may not have birthed my Daughter. If I wanted to I could have. I chose to watch from the outside. After going through the IVF procedure with Nina. It was truly heartbreaking to see many women break down in the waiting room knowing they would never be able to carry their own and have to take another direction. This doesn’t not make these woman any less of a MOM than Nina or I. As a MOM champion as well, I feel this needed to be said. @venezuelanvixen“

Prior to being submitted by Julianna Pena at UFC 269, Amanda Nunes was coming off a first round submission victory over Megan Anderson at featherweight.

It is expected that Pena and Nunes will have an immediate rematch sometime in the Spring of 2022.