Jon Jones has reacted after his longtime nemesis Chael Sonnen was detained with multiple citations for battery.

Jones and Sonnen have a storied rivalry dating back to their light heavyweight title fight at UFC 159 back in 2013.

That Spring evening in New Jersey, Jon Jones (26-1 MMA) successfully defended his title by disposing of Chael Sonnen (31-17-1 MMA) in the very first round via TKO.

Despite the decisive outcome in their title fight, ‘Bones’ and ‘The American Gangster’ never buried the hatchet. Instead, the pair have continued to trade insults over the course of the past eight and a half years.

That trend continued today after Jon Jones came across reports that Chael Sonnen was detained in Las Vegas last night for multiple citations of battery. 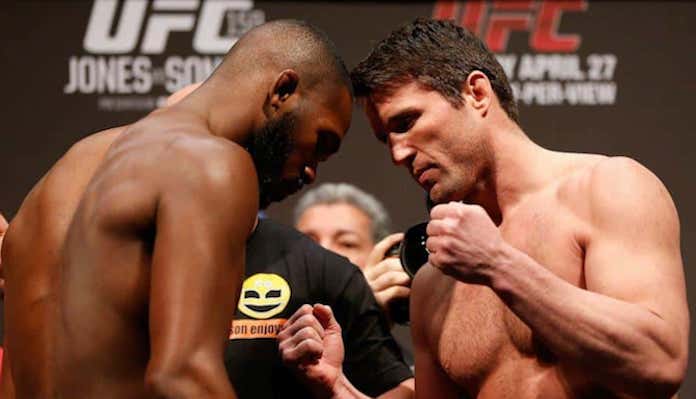 According to the report, a witness said she saw Sonnen banging on the door of a hotel room at the Four Seasons around 7 p.m. Saturday night. The witness says a couple walked by and a physical altercation broke out, the reason for the altercation is not known at this time. The witness says Sonnen was easily handling the man before the woman accompanied by the man began to scream and a bystander called the police which led to Chael Sonnen being detained and taken away in handcuffs.

Jon Jones, who was previously ridiculed by the ‘American Gangster’ for his recent arrest, did not hold back while addressing the news.

Chael Sonnen, I’m not gonna sit here and celebrate you getting battery charges against a female last night. That would make me like you, and I’m nothing like you. Instead I will wish your family well, I wish the victims family well

“Chael Sonnen, I’m not gonna sit here and celebrate you getting battery charges against a female last night. That would make me like you, and I’m nothing like you. Instead I will wish your family well, I wish the victims family well.” – Jones wrote on Twitter.

What do you think of the comments made by Jon Jones following Chael Sonnen’s detainment in Las Vegas? Share your thoughts in the comment section Penn Nation!