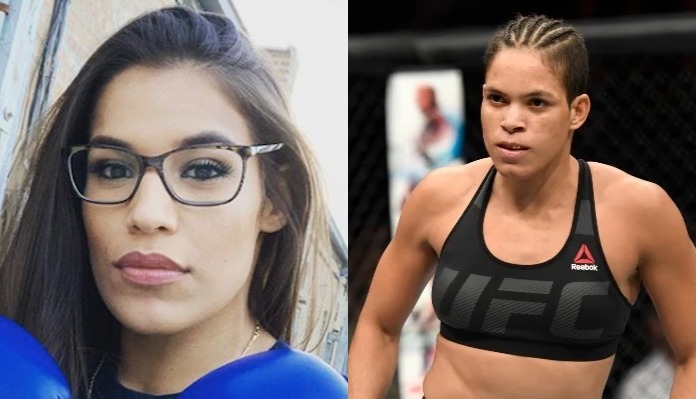 This Saturday night at UFC 277 in Dallas, Texas, the two are set to square off for the second time. Their rematch comes seven months after they fought the first time at UFC 269. The co-main event spot featured Nunes set to make another defense of her bantamweight title.

In that bout, ‘The Lioness’ lost via second-round submission in one of the biggest upsets in MMA history. Following the monumental fight, the UFC decided to have the two rivals coach the latest season of The Ultimate Fighter.

It was an interesting experience for both women. For her part, Pena has discussed how she enjoyed being a coach in the program. The women’s bantamweight champion famously was a contestant on the show back in 2013.

However, Amanda Nunes didn’t have the same experience. In a media scrum for UFC 277, the 34-year-old discussed her time on the show with Julianna Pena. It’s safe to say that she didn’t spend a lot of time around her rival. When she did, it was a bit strange.

“I just think she’s weird. But she’s in her own world, and I just did my own thing, so we didn’t see each other that much.” (h/t MMAFighting)

Amanda Nunes continued, “We saw each other just a couple times when the fights happened, but she was on her phone, doing something else, not looking at me. You know what, girl? You stay there. No worries, and let’s do what we came here to do, and that’s it.”

“I didn’t learn anything about her… She’s just, I don’t know, she’s in her own world. So I didn’t even want to interact with anything.”

What do you think about Amanda Nunes’s comments? Sound off in the comment section below!