Aljamain Sterling has responded to Jose Aldo after he tells him to ‘sign the contract’.

Following the victory, Sterling initially showed an interest in TJ Dillashaw, (18-4 MMA) but has since moved on to calling out Jose Aldo (31-7 MMA) for his next fight. 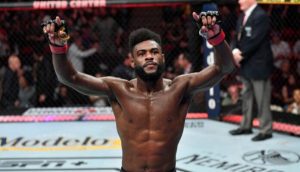 I am waiting for you to sign the contract for our fight. There is no doubt that the fans want to watch this fight. We are currently the 2 best bantamweights in the UFC.”

Well actually according to the UFC Bantamweight Rankings, Aldo is listed at number 4.

Aldo went on to explain why he deserved a shot ahead of TJ Dillashaw and Henry Cejudo saying via ‘Twitter‘:

“Let the rest of the boys fighting each other and exchanging insults on the internet. In my opinion it does not make any sense to let a guy who got suspended for 2 years for cheating to come back and fight for the belt after winning a split decision in a fight I think he lost.”

“The other one is a clown who faked his retirement just to try to raise his purse – as that did not work now he wants to fight for the title after spending 2 years out of the game (and out of the USADA’s pool).”

In response Aljamain Sterling had this to say via ‘Twitter’:

“@danawhite @seanshelby Hunter, when is our next War room meeting? Lots of money to be made!”

Would you like to see Aljamain Sterling and Jose Aldo meet up in the Octagon next?

This article appeared first on BJPENN.COM
Previous articleMichael Bisping responds after Jake Paul insinuates that he’s not about that life
Next articleJake Paul slams Kamaru Usman for suggesting boxing is dead: “Also Kamaru Usman: ‘pls Canelo fight me for a payday’”
© Newspaper WordPress Theme by TagDiv