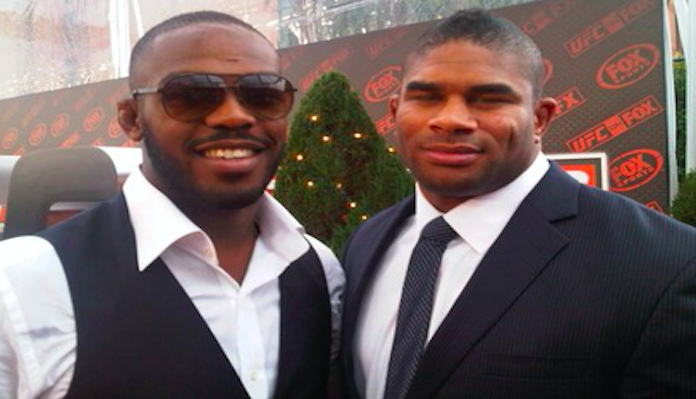 MMA legend Alistair Overeem says that he would be “honored” to welcome Jon Jones to the UFC heavyweight division.

Jones recently announced that he was vacating the UFC light heavyweight title with a planned move up to heavyweight. He has already been connected to fights against UFC heavyweight champion Stipe Miocic, top contender Francis Ngannou, and former champ Brock Lesnar. Now Overeem, the former Strikeforce heavyweight champion, has joined those names as someone who’d be interested in fighting Jones at his new weight class.

“Yes, I would (fight Jones). I think it would be a great fight, and I would feel honored,” Overeem said (via MMAjunkie.com).

Jones and Overeem previously trained together at Jackson – Wink MMA in Albuquerque, New Mexico, so both men are very familiar with one another’s game. For Overeem, he is calling out Jones as a sign of respect because he knows Jones is an incredible fighter and he would like to test his skills against someone of Jones’ caliber.

As of right now, there is no date set yet for Jones’ heavyweight debut. UFC president Dana White confirmed this week that the plan is still for Miocic to fight Ngannou again in a rematch, which leaves Jones without an opponent for the time being. There is a chance he could fight Lesnar if the UFC is able to re-sign the former heavyweight champion, but if Lesnar isn’t available and Overeem beats Sakai, then Overeem becomes a real possibility.

Overeem has said that at age 40 he is making one final run for the UFC heavyweight title, a belt that has thus far eluded him, so Jones moving up to heavyweight could push Overeem further down the title shot queue. For “The Demolition Man” though, he is just focused on his fight with Sakai this weekend and will let the chips fall where they may.

“I’m not too worried about that. Just focused on the task at hand, and with that being said, I just need to focus on winning my fights, and after that I believe I will get what I want,” Overeem said.

Would you be interested in watching Alistair Overeem vs. Jon Jones at heavyweight?