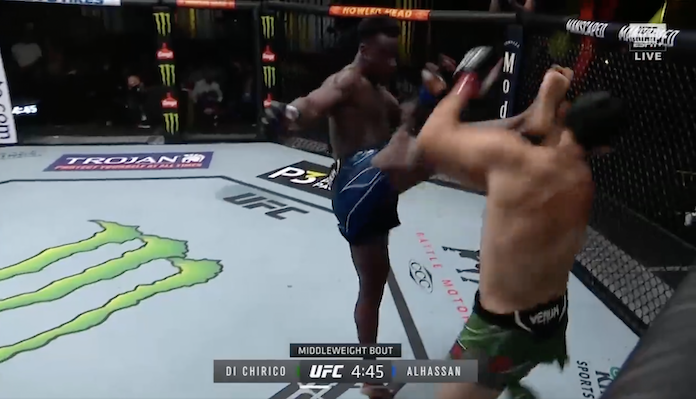 Di Chirico was a big betting favorite heading into the fight with Alhassan on the heels of his own flashy head-kick KO over Joaquin Buckley earlier this year. However, the Italian was upset quickly in the first round when Alhassan landed a brutal head kick that knocked him out cold. It was one of the most devastating and brutal head kick knockouts that we’ve seen all year in the UFC. Take a look at Alhassan’s incredible knockout in the video below.

Following the loss, Di Chirico took to his social media to react to the devastating defeat.

I don’t know what to say. Everything happened in a moment, a timeless blink of an eye. I thought he was going for a right hook, his best shot, I moved to duck and hit but I fell off guard and got kicked. Congratulations to my opponent @razakjudo I knew he was tough and he deserved his victory. No pick up lines from me you know very well I’m not a quitter. I’ll bounce back. You’ll see my hand raised again soon

As Di Chirico stated, the knockout happened so quickly that it was difficult for him to react to what happened at the moment. However, it’s good to know that he is making absolutely no excuses for the loss and instead credited his opponent on landing an incredible head kick. It was one of the best knockouts of the year in the UFC from Alhassan, who was riding a three-fight losing skid heading into this fight. While Alhassan saved his job with the UFC, Di Chirico is now 1-4 over his last five fights so it’s unknown what could be next.

What do you think is next for Alessio Di Chirico after getting brutally knocked out by Abdul Razak Alhassan at UFC Vegas 35?