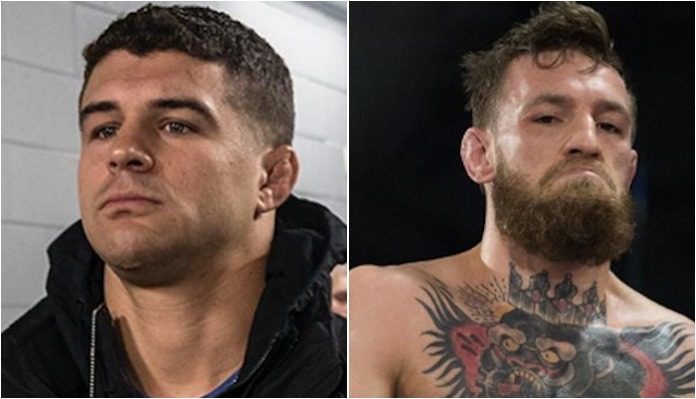 Al Iaquinta is one of many fighters calling for a fight with Conor McGregor.

The two have traded shots at each other in the lead up to UFC 229 where the Irishman was making fun of Khabib Nurmagomedov for going the distance with a Real Estate Agent. Obviously, Iaquinta did not take those words too kind and following the bout took shots at McGregor for getting submitted by the Russian.

Now, in a recent interview, Al Iaquinta explains why fighting Conor McGregor next makes sense for both of them.

“I would say that is the fight that makes the most sense out of everything. He is coming off a big loss. He got finished by Khabib and had all the time in the world to prepare for that fight. I took that fight on a day’s notice and showed my toughness,” Al Iaquinta said to TMZ Sports. “We would still be fighting now if there was no time on the fight. I’m fighting forever, I’m fighting until I die. Conor is not doing that.

“So, I think that is the fight that makes the most sense. But, he is selling whiskey and doing other things. I don’t think he is getting a rematch because there are guys working their way back and guys getting wins. His stock is not as high as he thinks it is. He got finished in his last fight. As far as everyone is concerned he is dead. The ref had to pull the guy off him. He looked like a sissy tapping out like that. So, he needs to come back and get a win. He’s not doing it and thinking he will get a rematch and if he does get a rematch he will get a beat again.”

Al Iaquinta is coming off of a decision loss to Donald Cerrone at UFC Ottawa in May. He says he is eyeing a return to the Octagon either this October in Australia, or this November at Madison Square Garden.

Conor McGregor, meanwhile, hasn’t fought since he lost to Khabib Nurmagomedov and then announced his retirement. Whether or not he will compete again, or fight Iaquinta remains to be seen.

Would you want to see Al Iaquinta vs. Conor McGregor? Sound off in the comment section, PENN Nation!