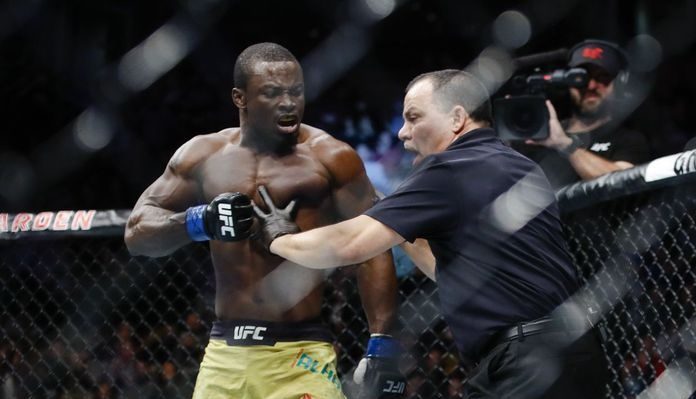 UFC welterweight Abdul Razak Alhassan says he wanted “revenge” against the rape accusers who caused him to lose nearly two prime years of his MMA career.

Alhassan is one of the top welterweights in the UFC. The 34-year-old native of Ghana has a 10-1 record in his career including a 4-1 mark in the UFC, with all 10 of his career wins have come by knockout. In his last fight at UFC 228: Woodley vs. Till back in September 2018, he finished Niko Price in devastating fashion to jump into the welterweight title mix.

This Wednesday at UFC on ESPN 13, Alhassan takes on UFC newcomer Mounir Lazzez in one of the most exciting matchups on the card. “Judo Thunder” is making his first walk to the Octagon in nearly two years after having his career temporarily derailed due to rape accusations by two women that eventually saw him found not guilty in the court of law.

Ahead of his return to the Octagon this week, reporters on Fight Island asked Alhassan what the last two years have been like for him, and his words were very powerful.

“There’s so many anger in me, so many anger. When this start, I don’t know if I should say this but maybe I’ll say it a little bit, but when I was going through this, I say to myself, ‘Death was good for me than going through this embarrassment that I’m going.’ Because I’m a good person, I would never do what they said I did. It got to the point I ask myself, ‘Why is God letting evil people like that live?’ Because if I didn’t do something like that you why? And you would think that the person would later realize and come and be like, ‘Hey, what I do to this person is wrong, he didn’t do what I said he did, I did a mistake.’ But no they were not coming out,” Alhassan said.

“I thought about revenge. If I tell you that I didn’t I’m lying. I thought about all the revenge and this is what I can to take revenge because they really got to feel the pain that they putting me through. They are out there stripping, not caring what they doing to me, you know, having life, putting stuff on social media, happy, throwing alcohols, while I’m at home crying, I can’t even take care of my kids. So much anger pent up. So much anger I really don’t even — I know it’s behind me now, but I really hope that takes some huge revenge on these girls, I really hope they get what they deserve.”

Although Alhassan missed two years of his career, he has the opportunity to make a statement this weekend when he takes on Lazzez on Fight Island. With a big win here, Alhassan can re-announce himself as a contender in the stacked UFC welterweight division.

Do you think Abdul Razak Alhassan will make a run for the UFC welterweight title?