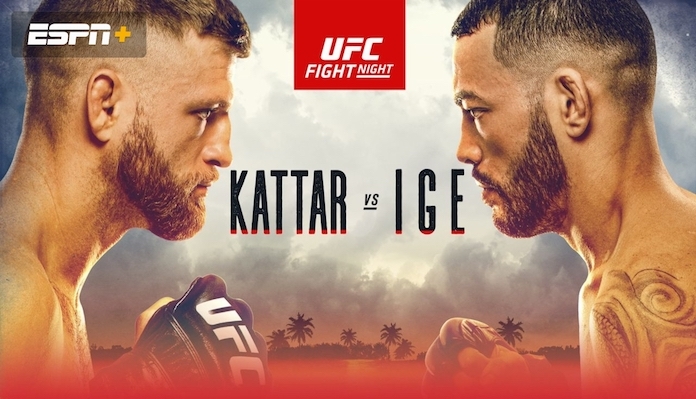 The full betting odds have been released for this Wednesday’s UFC on ESPN 13 card, featuring a main event between featherweights Calvin Kattar and Dan Ige.

The five-round main event between two of the best 145lbers in the world sees Kattar look to build on his momentum following a massive KO win over Jeremy Stephens in his last outing, while Ige puts his six-fight win streak on the line. The winner of this fight at UFC on ESPN 13 will no doubt put themself in a great position in the UFC featherweight division.

In the co-main event, a pair of always-exciting flyweights go at it as Tim Elliott takes on Ryan Benoit. Both men have inconsistent records in the UFC but both guys are known for putting on fun fights for the fans. As well, a pair of knockout artists in the welterweight division meet as Abdul Razak Alhassan returns to the Octagon against Mounir Lazzez, and two bantamweights meet at 145lbs as Jimmie Rivera takes on Cody Stamann.

Ahead of UFC on ESPN 13 on Fight Island, the oddsmakers have released the odds for the complete card. Here they are below, courtesy of BestFightOdds.com.

In the main event, Kattar opened as a -230 favorite, meaning you would have to bet $230 to win $100. As for Ige, he opened up as a +195 dog, meaning a $100 bet would win you $195. They are two of the best featherweights in the game right now, but Kattar has a much flashier style and is the more popular fighter at the sports betting window which leads to his favorite status here. But you shouldn’t count Ige out just yet.

As for the co-main event, Elliott opened as a -190 favorite while Benoit opened as a +165 underdog. Both fighters have been hit-or-miss in the UFC but there’s no doubt Elliott has fought the much tougher competition. Quite frankly, a fight like Jimmie Rivera vs. Cody Stamann probably should have been the co-main event for this card, but this fight between Elliott and Benoit should be a fun one, too.

Who do you like for bets based on the UFC on ESPN 13 odds?