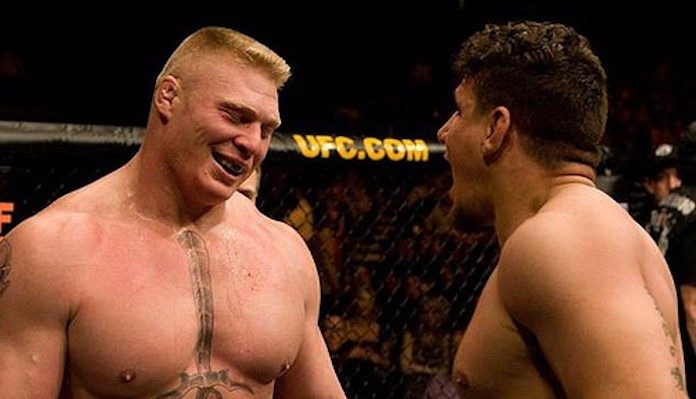 The two had one of the most high-profile rivalries in UFC history. Mir and Lesnar first faced off at UFC 81, in the latter’s first UFC appearance. Despite early success, the jiu-jitsu ace wound up catching the pro-wrestler in a submission to secure the victory.

However, it was their rematch that was a much bigger fight. A year after their first fight, the two headlined the historic UFC 100 card. That night saw Lesnar claim his revenge, as he defeated Mir via second-round TKO. The victory also saw the pro-wrestler earn his first heavyweight title defense.

Now, 13 years after their monumental rematch, Frank Mir is interested in a trilogy fight. Despite their two bouts being massive events, a third encounter never came to fruition. In an interview with Chris Van Vliet, Mir discussed his want for a trilogy bout.

“I wanted to put myself in a position by going out there and being successful at it, but it was one of those things where it wasn’t even in the talks.” (h/t MMAFighting)

Frank Mir continued, “I would be game [for a third MMA fight]. No [it was never close to happening]. Not on his radar, I guess. Just not that he wanted to do it. When you’re the A-side, he’s a draw money-wise, he gets to make more of the calls. From what I was told, because of the way I responded after the second fight, he truly felt that I was a little off. I think in Lesnar’s mind, how could you want to fight me again? People don’t [want to see it], so there’s something wrong with [me] that I think made him uneasy.”

Do you want to see Frank Mir vs. Brock Lesnar fight again? Sound off in the comment section below!