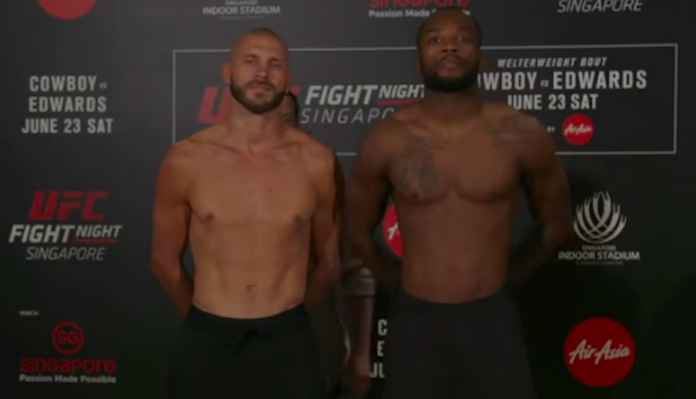 Tomorrow evening (tomorrow morning in North America) the UFC will take over the Singapore Indoor Arena with an exciting night of fights.

This UFC Singapore card will be headlined by a compelling welterweight showdown between beloved gunslinger Donald “Cowboy” Cerrone and rising British prospect Leon Edwards. The co-headlining bout, meanwhile, will see Australian light heavyweight prospect Tyson Pedro take on one of his toughest opponents to date in former interim title challenger Ovince Saint Preux. The rest of the four-fight main card, finally, will be rounded out by a flyweight battle between Jessica-Rose Clark and Jessica Eye, and a welterweight bout between Li Jingliang and Daichi Abe.

On Friday morning, the 26 fighters on this 13-bout UFC Singapore card took to the scales to weigh in for their respective battles. Remarkably, in this era of frequent weigh-in blunders, every single fighter on the bill hit their mark.

Here are the full UFC Singapore weigh-in results (via MMAjunkie).

As you can see, this UFC Singapore card begins very early tomorrow morning, with the prelims kicking off at 4:30 am, so be sure to set your alarm if you’re the kind of masochistic fan who refuses to miss any fights!