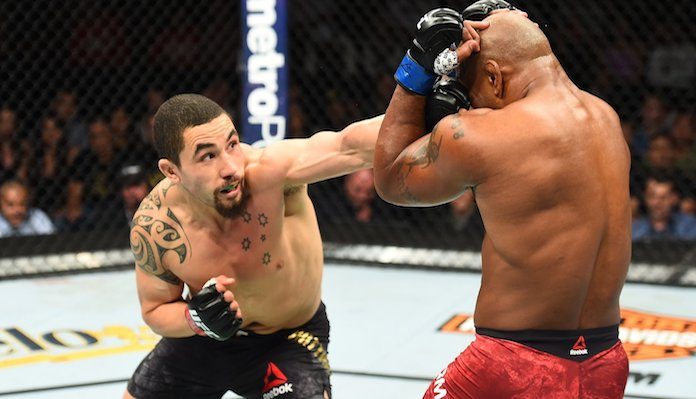 Yoel Romero pushed himself into a state of extreme dehydration in an effort to make weight for his UFC 225 showdown with middleweight champ Robert Whittaker — but unfortunately, he still missed weight anyway.

Amazingly, Romero showed no ill-effects of his brutal weight cut in the fight itself. In fact, he looked incredible, ultimately giving up a debatable, split decision to the champ.

Speaking on a recent episode of GrangeTV, Whittaker explained that he was very surprised by Romero’s ability to bounce back from his visibly taxing weight cut.

“Whatever he’s hydrating on, I would like to know so I can also hydrate on that,” Whittaker said. “Because it turns you superhuman, just about.”

That’s not the only thing Whittaker found surprising about Romero at UFC 225. The pair had fought once before, in July of 2017, and Whittaker says Romero felt like a completely different person when they met for the second time — like a person made of “steel.”

“When I was punching and kicking him [at UFC 225] he felt like metal — like a dude made out of concrete, it was a ridiculous,” Whittaker said.  “I fought him a year ago, and he didn’t feel like concrete. Not like that.”

“He’s a tough guy, and like I said before, he’s a top caliber athlete,” Whittaker continued. “But for him to come back the way he did, and for him to feel so differently and to perform so differently than he did a year ago — cause let’s not forget, I have fought him before. I’ve experienced his shots, I’ve experienced landing shots on him, I’ve experience fighting him before. For him to make those changes physically and athletically, in a year, at the age of 41… I’m leaving that down to nothing more than magic.”

What do you think of Robert Whittaker’s comments on Yoel Romero?