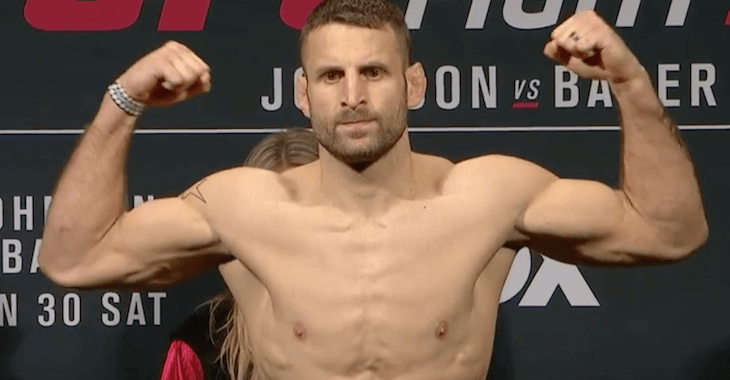 A welterweight tilt between Tarec Saffiedine (16-4 MMA) and Jake Ellenberger (30-11 MMA) served as the main event for the UFC on FOX 18 preliminary card in New Jersey.

Round two begins and Saffiedine opens by missing a head kick. Good right hand scores for Tarec. Ellenberger lands a shot to the body. He needs more of that. Good kick to the body by Saffiedine, who follows up with some crisp jabs. Nice short left by Jake. Ellenberger is having trouble figuring out the movement of Saffiedine who scores with another leg kick. Big punches miss from both men. Ellenberger tries with a jab but Tarec moves out of the way. Saffiedine with a trip attempt that fails. Low knee from Tarec connects with the groin of Ellenberger. The fight is paused. They restart and Saffiedine opens up with two kicks to the body. Solid jab from Tarec lands flush. Jake is pressing forward but just can’t find his range. Ellenberger scores a takedown but Tarec gets right back to his feet to end round two.

Round three begins and Saffiedine opens with a high kick which is blocked. Good jab from Tarec. Ellenberger is pressing forward but can’t seem to land anything flush. He presses Saffiedine against the fence and begins using some dirty boxing. The fighters break. Saffiedine with some good leg kicks and then a jab. Jake is chasing after him but can’t land anything. Another hard leg kick from Saffiedine lands. He’s hurting Jake with these kicks. Another solid jab by Tarec. Huge right hand attempts misses from Ellenberger. More legs kicks from Saffiedine and then a body kick that lands. The fighters exchange jabs. Jake shoots in but Saffiedine stuffs the attempt. Good knee in the clinch from Tarec. Ellenberger replies with a knee of his own. Jake is trying his best to score a takedown but gives up his back to Saffiedine. Tarec is trying a rear-naked choke. He has one hook in. Jake fights his way back to his feet. Final seconds and Ellenberger tries another takedown but is stuffed. Horn sounds and we go to the judges scorecards.