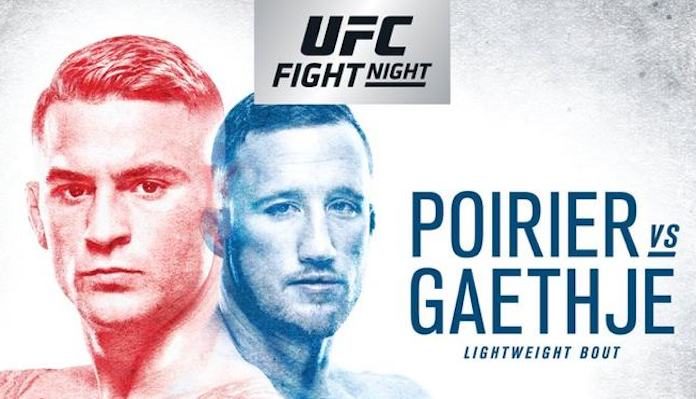 A key lightweight fight between perennial division contenders Dustin Poirier and Justin Gaethke served as the headliner of tonight’s UFC on FOX 29 event in Glendale, Arizona.

Round one begins and Gaethje comes forward quickly. Poirier catches him with a left hand followed by a right up the middle. Justin with a hard low kick. He lands another. Poirier lands a double jab. Gathje with a hard low kick that causes Dustin to fall the canvas. He pops right back up. Poirier with a nice combination. He lands a left hook. Justin comes forward with a left hook of his own. He follows that up with a low kick. Poirier circles and then lands a pair of jabs. Dustin leaps in with a right hook but Gaethje just smiles at him. Poirier with another nice combination. Justin fires off another hard low kick. Poirier responds with a big punch to the body. He is unloading punches in bunches here. Gaethje lands a low kick and Poirier replies with one of his own. Dustin with a nice uppercut. He lands a kick to the body followed by a solid uppercut. Poirier is all over him right now. He lands a nice hook to the body. Gaethje returns fire with a hook followed by a low kick. Both men swing leather until the horn sounds to end round one.

Round two begins and Poirier lands a right hook. Gaethje leaps in with a combination. This fight is non-stop action. Poirier with a kick to the body. Gaethje with a nice double jab. Poirier shoots in for a takedown but it is not there. An accidental eye poke lands from Gathje on Poirier. Dustin recovers and then we restart. Poirier comes forward with a combination. Gathje catches him with a counter right hand. Poirier side steps and then lands a nice combination. Both men are throwing heavy punches here in round two. Justin charges forward with an uppercut. Dustin circles and then unloads a plethora of punches in the pocket. Gaethje just eats those shots and moves forward. Justin with a nice jab followed by a low kick. Dustin comes back with a big combination. That was a four-punch combo. Gaethje circles but Dustin presses forward and shoots in for a takedown. It is not there. Big shots from Poirier in the pocket now. He follows that up with a low kick. Just over a minute remains in round two. Dustin with a nice low kick. Gaethje fires back with a pair of punches. “The Diamond” has already landed over 100 punches in this fight. That is just insane. Justin with a low kick. Poirier again shoots in but the attempt is stuffed by Gaethje. The fighters clinch along the fence and Gathje unloads some uppercuts. Round two comes to an end.

Round three begins and Poirier lands a big jab to start. Gaethje returns fire with a low kick. A second kick is caught by Poirier who tosses the limb aside. Poirier with a left hook. Gaethje side steps and then presses forward with a right hand. Dustin shoots in and scores a big takedown. Gaethje immediately scrambles back to his feet. A big inside low kick lands for Justin. Poirier did not like that. Another big kick from Gaethje. Justin lands a big left hand that hurts Poirier. He follows that up with an elbow against the cage. Dustin is in trouble. Gaethje has him presses against the cage. Justin with some knees and then a big uppercut. More knees from Justin. Poirier breaks free and circles off the fence. Dustin with a pair of nice jabs now. Gaethje just continues to walk him down. Justin with another hard low kick. Poirier answers with a hard right hook. That forces Gaethje to clinch up. He presses “The Diamond” against the cage. Poirier breaks free and then takes the center of the octagon. Another eye poke from Gaethje puts a stop to the action. We restart and Herb Dean takes a point from Gaethje. Justin misses with a low kick and the horn sounds to end round three.

Round four begins and Gaethje comes forward with a combination. Poirier tags him with a left hand. Dustin is all over him with punches. Justin is trying to weather the storm. Poirier with punches in bunches. Gaethje goes down and this one is all over! WOW!