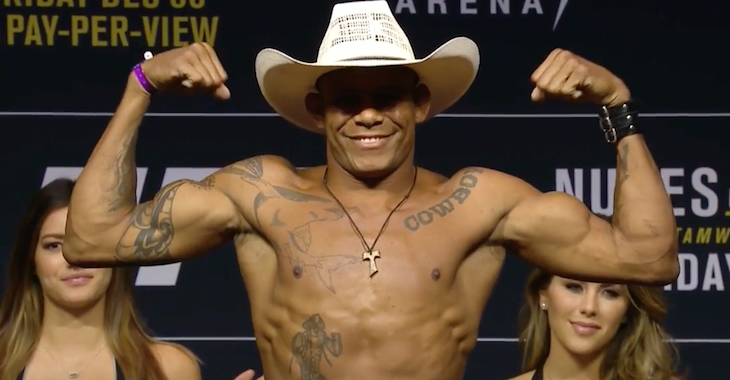 Round one begins and Oliveira takes the center of the octagon. Condit misses with an attempted low kick. He circles along the cage. Carlos comes forward but Alex lands a beautifully timed counter right hand. Condit seems to be ok but that was a big shot. Oliveira with a kick to the body. Condit returns fire with a low kick. Both men come forward with punches which leads to a clinch. Alex scores a trip takedown and winds up in full guard. He quickly moves to half guard. He begins working some elbow to the body of Condit. Alex with some punches now. Condit scrambles but gives up his neck. Oliveira drops down for a guillotine choke but Condit escapes the submission attempt. Carlos is now on top and working from half guard. Big punches from the “Natural Born Killer”. He is unloading left hands on Oliveira. Alex scrambles but gives up his back. Condit locks in a rear-naked choke. Oliveira escapes. Condit locks it back in. The horn sounds to end round one.

Round two begins and Alex Oliveira immediately shoots in and lands a takedown. He takes full guard poition and then promptly lands a right hand. Condit with a nice up-kick from his back. That allows him to scramble back up to his feet. Oliveira pushes Carlos back against the cage and then lands another takedown. He steps over into half guard and then lands a pair of big elbows. Condit scrambles and then reverses the position. Condit is now on top and working from full guard. Condit is bleeding badly but manages to unload a big elbow from the top. Oliveira scrambles and then locks in a deep guillotine. Condit appears to be ok but this is tight. Oliveira adjusts and Condit taps. This one is all over! WOW!