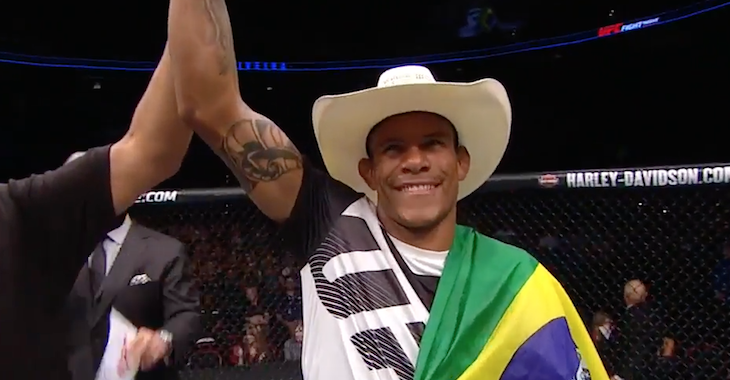 Alex ‘Cowboy’ Oliveira is a father of 11 and he just told Niko Price, soon-to-be father of 6 to ‘get a vasectomy.’

The pair will go head to head at UFC Fight Night 192 with both men looking to return to winning ways.

Price recently announced the birth of his next child on social media. In an interview with MMAFighting, Oliveira said,

“I’d tell him, ’If you can get a vasectomy already, do it, brother. I was sexist. ‘Will it continue the same way after surgery?’ And I got 11. If I had done surgery before, I would have gotten only four or five [kids].

“That’s my advise for him, man. Know the truth. Get the surgery done already, because it seems that condoms can’t stop us.”

“This fight has everything to win a bonus.”

“He’s very versatile, a tough guy that can take a beating,” Oliveira said of Price. “He’s the type of guy that you have to stay alert at all times and in shape, and put pressure at all times. My camp was very medieval. You can expect anything from him so I had to train everything for him. I’m ready for a war,” Oliveira added.

Vasectomy talk aside; both fighters will come into this bout seeking a reverse in fortunes. Oliveira is looking to snap a two fight losing steak having succumbed to first round submissions against Shavkat Rakhmonov and Randy Brown. Price, meanwhile has endured two losses and one no contest in his last three with his last victory coming against James Vick in 2019.

Oliveira knows Price well from their time training together at American Top Team and is acutely aware of how important it is to get the best of him here and get his career back on track.

“I’m on this journey for a long time,” Oliveira said. “I know we can’t disappoint. I’m going there to give them what they want and have my hands raised. That’s what I need at the moment. I always put pressure over myself, but highs and lows do exist.

“I’ve studied him completely, I know he has won by knockout off his back, with upkicks and unexpected strikes. I’m well-trained, I’m focused. He’s the type of fighter that will try to finish me, take me down and keep me there and win round after round, but the only way you’ll win round after round is if I stand still. I’m hungry, man. I’m here for a fight.”