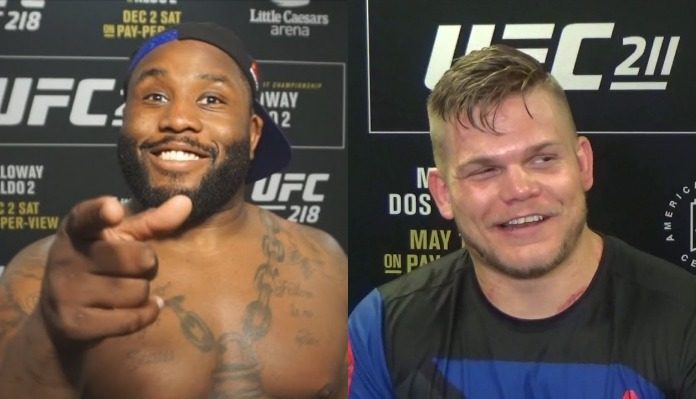 Round one begins and Sherman begins by circling along the outside. Willis comes forward with a big combination. Chase avoids any real damage and then fires off a low kick. Another low kick lands from Sherman. Willis counters nicely with a straight punch up the middle. Willis lands a huge left hand that wobbles Sherman. Chase retreats and attempts to gather his bearings. Another big shot from Willis. Chase responds with a right hand followed by a low kick. Sherman is pressing forward now. He throws a combination. A knee from Justin lands low and the referee steps in and calls a break in the action. Sherman recovers and we restart. Chase comes forward and Willis catches him with a massive shot. Sherman drops and Willis is all over him with punches. Somehow Chase is able to survive. He scrambles and gets back up to his feet. Willis with a left hand. Sherman responds with a right. This fight is great. Sherman throws a kick but Justin Willis catches it. Justin with a big right hook. Sherman replies with a leg kick. Willis wings another left hand. He comes forward and lands a knee. Sherman misses with a right hand. Willis connects with a pair of uppercuts in the clinch. Sherman presses Justin against the cage. Chase works in some short shots. Ten seconds remain. Sherman with a knee. Round one comes to an end.

Round two begins and Sherman comes out quickly. He lands a low kick. Sherman circles and takes the center of the octagon. Sherman goes high with a kick but it is blocked. Chase lands a pair of jabs followed by a low kick. Willis counters with a nice right hook over the top. Sherman fires off a pair of low kicks. Willis circles and then lands a straight left hand up the middle. Sherman with an accidental eye poke. That causes the referee to step in and call a stop to the action. Willis recovers and then we restart. Both men fire off big punches. Willis partially lands a left hand. Sherman goes back to his low kicks. Under three minutes remain now. Chase Sherman with a nice kick to the body. He circles along the cage. Willis just misses with a left hand. Sherman connects with a nice front kick to the body. He lands another good low kick. Willis fires back with a left hand. Sherman attempts a kick but Willis rushes in and takes him to the canvas. Willis is working from Sherman’s guard now. He lands a hammer fist and then a right hand over the top. Willis with some elbows now. Sherman is doing his best to hold on here. Willis postures up and rains down a right hand. He switches to some shots with his left fist. Round two comes to an end.

Round three begins and Sherman throws a low kick to start. Willis quickly replies with a big combination. Another nice low kick from Sherman. He attempts to go high but Willis catches it and presses him against the cage. Sherman lands a nice elbow. The fighters break off the cage. Both men stand and trade strikes in the center of the cage. Willis shoots in but it is Chase who ends up pressing Justin against the cage. The fighters battle in the clinch and then break. Willis throws a combination. Chase replies with a low kick. He shoots in and presses Willis against the cage. Two minutes remain in the final round. Sherman lands a pair of elbows in the clinch. Willis breaks free but Sherman chases after him and lands a left hand. Willis responds with a big shot to the body. He pushes Sherman up against the cage. Sherman with some shots to the body. Willis misses with a left hand and they break. Twenty seconds left. Sherman lands a kick. They clinch and the horn sounds to end round three.