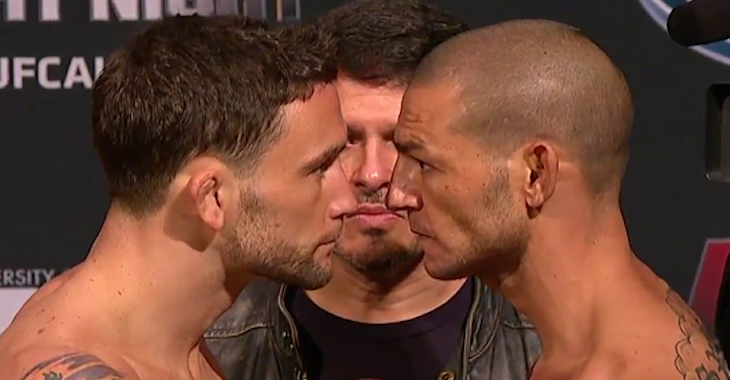 Following the fighter introductions from legendary announcer Bruce Buffer the referee signals to start round one.

Frankie Edgar comes out quickly as always. He takes the center of the octagon. Swanson paws at him with his jab. Edgar circles and looks to find a way inside. Swanson looks like he’s trying to time one of Edgar’s punches. Frankie continues to press forward. He misses with a low kick attempt. Swanson goes to the body with a punch but gets counter nicely by Frankie with a left. Edgar goes to the body with a kick. He throws a double jab and then shoots in for a takedown. Cub stuffs the attempt. Edgar chases after him with a combination that ends in a right hand over the top. Edgar with a low kick now. He looks to have found his groove early here. Edgar with a leaping right hand. That connects. He charges after Cub and presses him up against he cage. Swanson breaks free and circles off the fence. Edgar misses with a low kick attempt. Swanson is very flat footed here. He eats a hard low kick from Edgar. Frankie continues with a nice kick to the body. Swanson lands a jab. Edgar slips while attempting to shoot in for a takedown. Frankie misses with a head kick. Both men land left hooks. Cub throws a jab that misses the mark. Swanson with a nice spinning kick and round one comes to an end.

Edgar closes the distance and lands a nice shot on Swanson, but Cub stuffs the takedown! #UFCAC pic.twitter.com/HXM7OkFqCk

Round two begins and Edgar comes out with some early pressure. Cub tries to keep him at bay with his jab. Edgar just walks through it and attacks with a body kick. Edgar leaps in with a right hand over the top. Cub is beginning to wear this damage now. Edgar continues to press the action. He lands a combination followed by a body kick. Edgar with a hard low kick. He tries one to the body but it is blocked. Frankie shoots in for a takedown but it is not there. Cub looks perplexed here. He just can’t find his way inside. Edgar with another beautiful combination that ends in a low kick. He looks phenomenal tonight. Cub with a straight right hand but Edgar shoots in and wraps him up. Swanson avoids being taken down and circles out. Frankie comes after him and lands a low kick. He follows that up with a jab and then another low kick. Just over one minute remains in round two. Swanson with a hard low kick that lands flush. He needs more of that. Frankie continues to press the fight and lands a jab. He goes high with a kick but it is blocked. Swanson lands another jab and then a counter left hand. Edgar replies with a left. Swanson fires back with a pair of hard hooks. That opens a cut under the right eye of Edgar. Round two comes to an end.

Swanson stops the take down, and lands two big shots on Edgar that cut him open! #UFCAC pic.twitter.com/OK6lU9gdx9

Round three begins and Swanson comes out with a left jab. He is likely down two rounds here. Edgar circles and lands a hard low kick. He pushes forward but misses with an attempted combination. Frankie circles and then lands a low kick. He follows that up with a left hand over the top. Cub takes the center of the octagon. His hands are at his hips here. He paws with a jab. Frankie throws a kick but Swanson counters nicely with a right hand. Three minutes remain. Cub with a head kick attempt that is blocked. Edgar side steps and lands a big right hand down the middle. Cub goes to the body with a hard hook. Edgar eats it and then fires off a pair of kicks to the body. Swanson just misses with a right hand and then a head kick. Edgar shoots in and presses Cub against the cage. After a brief clinch the fighters break and Edgar lands a kick to the body of Cub. Swanson needs to do something here. He lands a left hook. Under one minute remains as Edgar circles on the outside. Swanson with a nice combination. Edgar returns fire with a low kick. He follows that up with one to the body. Edgar lands an uppercut. Cub with a low kick and the horn sounds to end round three.