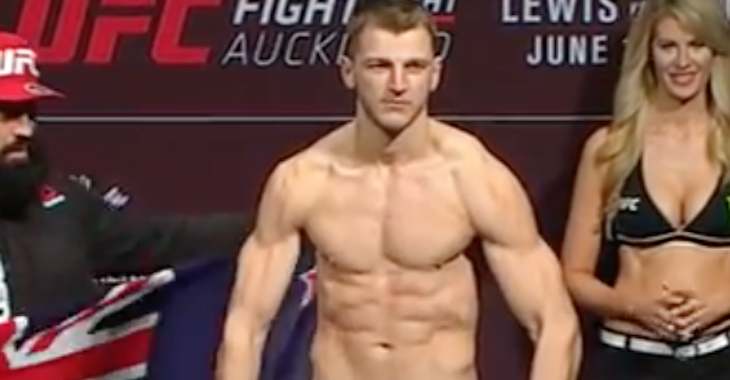 Round one begins and Diakiese quickly takes the center of the octagon. Hooker throws a jab that misses. He circles around the outside. Marc throws a side kick that misses. Both men are very cautious early here. Hooker feints with a low kick. Diakiese throws a side kick to the thigh that lands. Hooker with a low kick and then just misses with a high kick. Marc circles along the fence. He steps in with a side kick that partially connects. Hooker with a right hand and then slips a straight right from Marc. Hooker with a kick to the body and then catches a spinning back kick from Diakiese. Dan is doing an excellent job early here. He lands a crisp jab. Diakiese misses with a low kick. Hooker connects with one of his own. Marc circles and then lands a nice switch kick. One minute remains in round one. Hooker throws a low kick but Diakiese catches it and then lands a low kick of his own. Hooker leaps in with a nice body kick. Diakiese attempts to shoot for a takedown but Hooker sweeps him and winds up in top position. Round one comes to an end.

Round two begins and Diakiese quickly presses forward with a combination. Hooker replies with a low kick. Diakiese with a left but Hooker lands another hard low kick. Marc is really applying the pressure here. Dan side steps and then lands a kick to the body. Diakiese with a left hand over the top. He circles but Hooker lands a nice right hand and then grabs him and pushes him along the fence. Hooker with some good shots from the clinch here. Dan drops down for a double leg takedown and gets it. He quickly transitions and takes the back of his opponent. Hooker locks in a body triangle and Diakiese is now in all sorts of trouble. Hooker begins working for a rear-naked choke. Diakiese is defending well. Eventually Marc is able to scramble and winds up in top position. Round two comes to an end.

Round three begins and Diakiese starts off quickly with a leg kick and then a right hand over the top. Marc is throwing caution to the wind here. He presses forward with a wild combination and then dives in for a takedown. Diakiese leaves his neck out and Hoooker snatches it up. He locks in a guillotine choke and this one is all over!