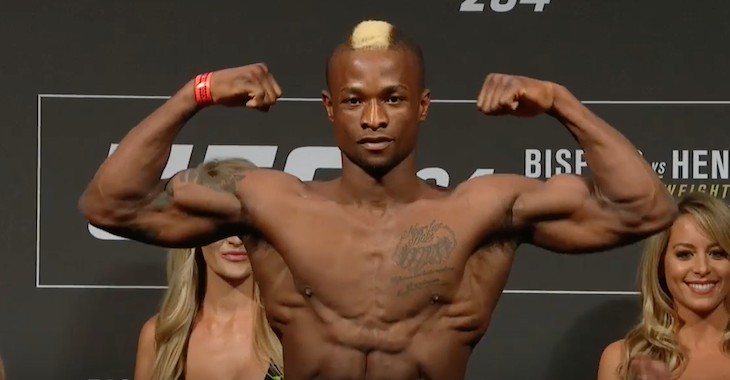 A lightweight bout between Lukasz Sajewski and Marc Diakiese kicked off the UFC 204 prelims on FS1.

Round one begins and Marc charges forward but gets taken down with ease by Lukasz. Sajewski immediately moves to side control and looks to advance his position. Diakiese scrambles and gets back to half guard. Sajewski works some short shots from the position. Marc gets back to his feet but is in a guillotine choke. He picks up Sajewski and slams him to the ground. Lukasz bounces right back to his feet and presses Marc against the cage. He ducks under and scores a takedown on Diakiese. Sajewski moves to half guard and lands some short strikes to the body. Lukasz with a knee. Diakiese rolls for a heel hook. He uses the submission attempt to get back to his feet. Back-to-back low kicks score for Marc. He lands another and Lukasz shoots in for a takedown. It is not there and round one comes to an end.

"WHEN I SLAM HIM THROUGH THE OCTAGON AT #UFC204, BROTHER!" pic.twitter.com/cSaTciQVDQ

Round two begins and Diakiese lands a nice kick to start off the round. He presses forward but is careful to keep his distance. A nice combination from Marc. He comes forward with a flying knee that misses. Lukasz circles away from the cage and looks to clinch. He does and presses Marc against the cage. Diakiese breaks free and lands a low kick. Marc comes forward and lands a hard uppercut. Sajewski returns fire with a low kick. Marc presses forward and begins unloading shots. Lukasz looks to be tired. His hands are at his hips. Marc presses forward and lands some solid punches. He unloads some knees against the cage. A big uppercut connects. More punches from Diakiese and the referee has seen enough and steps in to stop the bout.