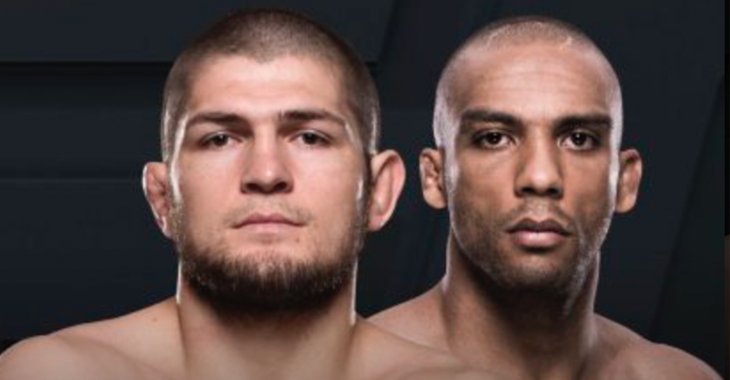 Round one begins and Barboza lands a nasty inside leg kick to start. He lands another. Khabib is applying a lot of pressure trying to prevent Edson from throwing those kicks. “The Eagle” shoots in but Barboza is able to scramble free. Khabib with a right hand as he chases after Edson, he presses Barboza against the fence but cannot secure the takedown. Edson breaks free. He lands a low kick and then a hook. Khabib eats the strikes and continues to press forward. He gets inside and scores a trip takedown. Khabib working from top position now. He lands a big elbow and then some hard punches. Barboza is trying to kick Khabib off of him but it doesn’t work. Another massive shot from Nurmagomedov. He moves to side control and then mount. Barboza is in a bad spot here. Khabib with full mount now. He begins raining down big left hands from the top. He switches to right hands and this is getting ugly quickly. Barboza attempts to scramble but Khabib won’t let him go. More shots from the top by Khabib. He lands a nasty elbo and then works the body. Nurmagomedov with another big punch. He tries to take Edson’s neck but Barboza survives to see round two.

Khabib throws a flying knee, then gets Barboza to the ground here in round 1!! @TeamKhabib #UFC219 pic.twitter.com/1o0QV8qsVZ

Round two begins and Khabib quickly rushes in with a leg kick followed by a right hand. Edson responds with a kick to the body. “The Eagle” with some beautiful jabs now. He is busting Edson up. Khabib with a big kick and then he shoots in and presses Edson against the fence. Nurmagomedov is unloading uppercuts from the clinch. Barboza is able to break free but Khabib is all over hm. Barboza lands a nice body shot followed by a hard low kick. Nurmagomedov with a nice right hand. He tosses Barboza against the cage and then secures an easy takedown. Khabib has just under two minutes to work. He begins battering Barboza with punches from the top. Edson is badly busted up. Khabib just continues to maul him with strikes. He drops bombs until the horn sounds to end round two.

Round three begins and Barboza lands a hard inside leg kick to start things off. He is still in this fight. Khabib with a nice left jab. He chases after Edson and lands a right. Barboza is circling along the fence but he can’t escape Khabib’s pressure. Nurmagomedov gets inside and easily bring Edson to the floor. Babrboza quickly gets back up but “The Eagle” stays on him with relentless pressure. Barboza eventually breaks free and throws a spinning back kick that partially lands on the head of Khabib. He attempts another but it misses the mark. Khabib shoots in and scores yet another takedown. He begins working some brutal ground and pound. Hard left hands from Khabib. Barboza gets back to his feet but he eats a jab from Khabib. This one is all over as the horn sounds to end round three.