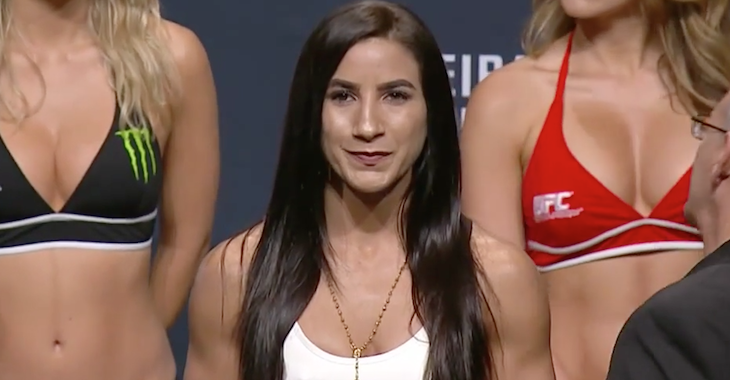 Round one begins and Torres starts off quickly. She leaps in with a combination. Waterson circles out and throws a head kick. It misses the mark but Michelle shoots in and gets Tecia to the floor. Waterson immediately moves to take the back of Torres and does. Michelle can’t maintain the position and Torres stands back up. Waterson has her against the cage but Tecia eventually breaks free. Waterson lands a nice left kick to the body. Torres comes forward with a combination. Waterson avoids eating anything significant. Torres comes forward and lands a knee. She presses Waterson against the cage and lands a nice short elbow. Waterson fires back with a pair of knees. Torres works in another elbow followed by a right hand. Two minutes remain. Waterson breaks free but Torres is immediately on her and puts her back up against the cage. Nice short shots form Torres. Waterson responds with a knee. The fighters break and Waterson misses with a high kick. The fighters once again clinch and Torres lands a knee. They break and Waterson lands a front leg side kick. She lands another. Torres presses forward and once again pushes Michelle against the cage. She lands a big elbow and then a punch as the horn sounds to end round one.

Round two begins and Waterson starts out by pawing with her left jab. Torres immediately begins to pour on the pressure. She lands a nice combination. Michelle returns fire with a knee. Waterson shoots in and scores a takedown. Tecia is almost able to sweep and get back control but Michelle avoids and winds up in full guard. She quickly transitions to half guard. Waterson is having trouble getting off any offense. Tecia is doing a good job of keeping wrist control. Torres looks for a kimura but it is not there. Waterson ends up back in full guard after the transition. Ninety seconds remain in round two. Tecia lands an elbow from the bottom. Waterson has been on top for a while but hasn’t really done much at all. One minute remains in the second round. Tecia is looking for a triangle choke. It is not there. She transitions to an armbar but Waterson breaks free of the hold. Torres gets back to her feet but eats a knee. Round two comes to an end.

Round three begins and Michelle lands a nice right hand. She shoots in for a takedown but it is not there. Torres pushes Waterson against the cage. Tecia with a knee. Michelle breaks free and circles out. Waterson with a right hand. She misses with a follow up leg kick. Torres with a right. Michelle with a left. Torres goes to the body with a kick. Tecia with a strike and Michelle slips and falls to the ground. Tecia rushes in but eats an upkick. Torres gets top position and then quickly transitions to the back of Waterson. Tecia appears to be to high but manages to flatten Waterson out. She begins landing some big shots. Waterson scrambles but Tecia has her back. Michelle spins and winds up on top. She stands back up and Tecia catches her with a punch. The horn sounds to end round three.