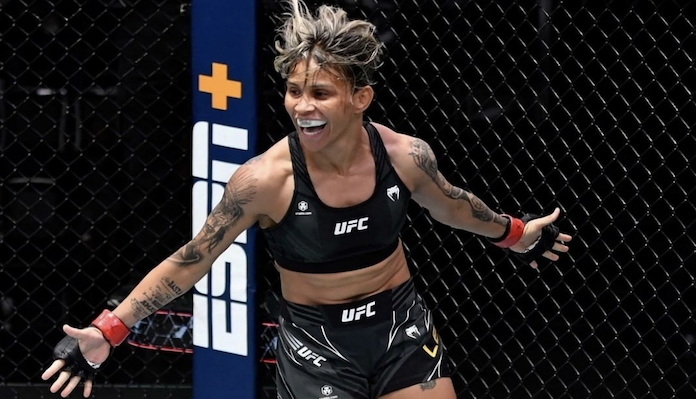 Waterson (18-9 MMA) will enter the contest looking to rebound, this after suffering a unanimous decision loss to Marina Rodriguez her last time out. ‘The Karate Hottie’ has gone 1-3 over her past four Octagon appearances overall.

Meanwhile, Amanda Lemos (11-2-1 MMA) will also be looking to return to the win column this afternoon in New York. The Brazilian is coming off a first round submission loss to Jessica Andrade back in April.

Round one of the UFC Long Island co-main event begins and both ladies land low kicks to open the bout. Lemos with a body kick. Michelle Waterson back to the legs. Jabs traded. Another body kick from Lemos finds the mark. ‘The Karate Hottie’ with more low kicks. Lemos returns them. A hard right hand from Amanda Lemos as Waterson was off balance. Another big right from Lemos and then a low kick. She scores with another right and then a hard 1-2. Waterson with another low kick. She goes tot he body. Lemos counters with a right hand. Waterson shoots in and gets a takedown. Waterson passes to half guard. She lands a couple shots but gets swept and ends the round on her back.

Round two of the UFC Long Island co-headliner begins and the fighters trade body kicks. Michelle Waterson lands another but eats a counter left. Amanda Lemos with a nice kick to the body. Lemos lands a big body shot and then a 1-2. Waterson shoots in for a takedown. Lemos stuff it and jumps on a guillotine. This one is all over.

Amanda Lemos sinks in the second round submission! #UFCLongIsland pic.twitter.com/2ctDGjr4lB

Who would you like to see Lemos fight next following her submission victory over Waterson this afternoon in New York? Share your thoughts in the comment section PENN Nation!