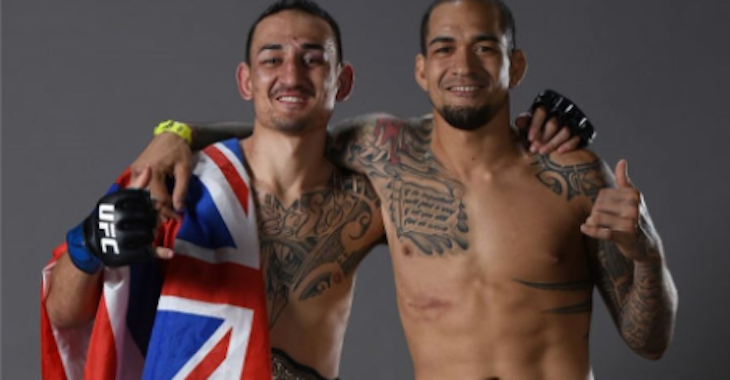 It did not take long for the pros to react to tonight’s crazy scrap between Yancy Medeiros and Alex Oliveira.

The exciting welterweight fighters exchanged bombs for the better part of three rounds before Medeiros eventually put Oliveira away with punches.

Here is how the pros reacted to tonight’s Medeiros vs. Oliveira scrap which is already getting mentioned as a potential fight of the year candidate.

Last two nights I’ve seen some great reffing, guys going down and having to get finished with follow up punches

What a war! Hawaii stand up! #UFC218 https://t.co/yhQaMQIKVK

So much heart from both guys #UFC218

Get the full Medeiros vs. Oliveria UFC 218 fight recap below:

Round one begins and Medeiros throws a low kick. Alex responds with a nice body kick followed by a right hand. Yancy lands a straight left that sends Alex to the floor. “Cowboy” bounces right back up and unleashed a good combination. He presses Yancy against the fence and works in a knee. Oliveira with a knee but it hits Yancy low. The referee steps in and stops the contest to allow Yancy time to recover. He does and we restart. Alex lands a huge right hand that drops Medeiros. Wow. Yancy scrambles back to his feet but Alex is on him with strikes. The fighters battle against the cage. Alex with another right hand. It drops Medeiros. Yancy is back up but Alex is all over him with strikes. Punches and elbows from “Cowboy”. He lands a big knee to the body. Yancy fires back with an elbow. This fight is crazy. Yancy circles off the fence and lands a right hand. “Cowboy” responds with a right hand of his own. He pushes Yancy against the cage and lands an elbow. The break away from the fence and Alex lands a right hand. He has Medeiros hurt. All kinds of punches in bunches from “Cowboy”. Somehow Yancy is still on his feet. The horn sounds to end one of the best rounds of recent memory.

Round two begins and Oliveira lands a nice kick to the body to start things off. Yancy takes the center of the octagon. He attempts to clinch but a front kick to the body from Oliveira doesn’t allow him to do so. Alex with another good right hand. Yancy returns fire with a stiff jab followed by a shot to the body. Cowboy with a body kick followed by a right hand. Yancy with a nice counter right hand. That stuns Oliveira who opts to circle out and retreat. Yancy with a body shot. He lands a nice right. Oliveira replies with one of his own. He follows that up with a front kick to the body. Medeiros comes forward and throws a high kick that partially lands. He charges in with some hard shots to the body. Alex shoots in for a single leg but Yancy won’t allow that. Cowboy circles and then lands two more hard kicks to the body. Yancy replies with a straight left. Alex with a right hand over the top. Medeiros scores a sweep during a scramble and winds up in full mount. He begins landing some big ground and pound. Alex scrambles back up to his feet. Yancy is still on him and lands an elbow to close out round two.

Round three begins and we start things off with a hug. Medeiros with a high kick but he gets countered by a hard right hand from Oliveira. “Cowboy” charges in with punches and then scores a takedown. He takes the back of the Hawaiian. Yancy stands back up but Alex just slams him back down. Oliveira takes his back but Yancy scrambles and winds up in top position. Yancy moves to half guard. Alex scrambles and gets back to his feet. Yancy is all over him now. He lands a left hand. He follows that up with a plethora of punches. Cowboy drops and this one is all over! WOW!