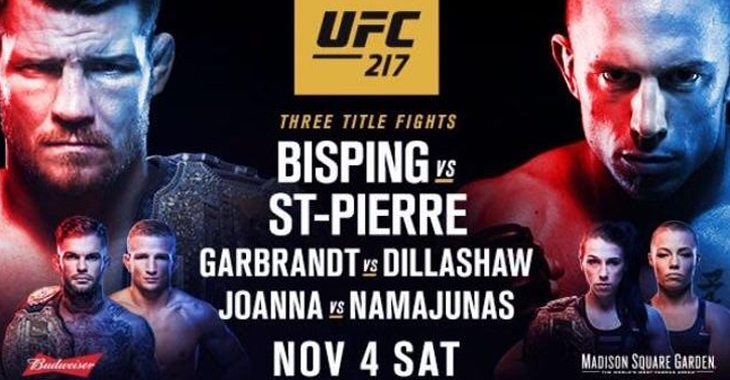 UFC 217 takes place this weekend on November 4 as the UFC returns to the historic Madison Square Garden in New York.

The main event of the night will feature the UFC middleweight title fight with champion Michael Bisping taking on former UFC welterweight champion Georges St-Pierre. St-Pierre will be returning to competition after stepping away from the sport nearly four years ago.

Also on the stacked card, Cody Garbrandt will look to defend his UFC bantamweight title against former teammate and former champion TJ Dillashaw in the co-main event. A third UFC title fight for the night will feature Joanna Jedrzejczyk looking to defend her UFC women’s strawweight title for the sixth time against Rose Namajunas, which would tie Ronda Rousey for the most consecutive female UFC title defenses. Which fights are you looking forward to the most? Let’s get your prediction in the comment section on how and when those fights end!