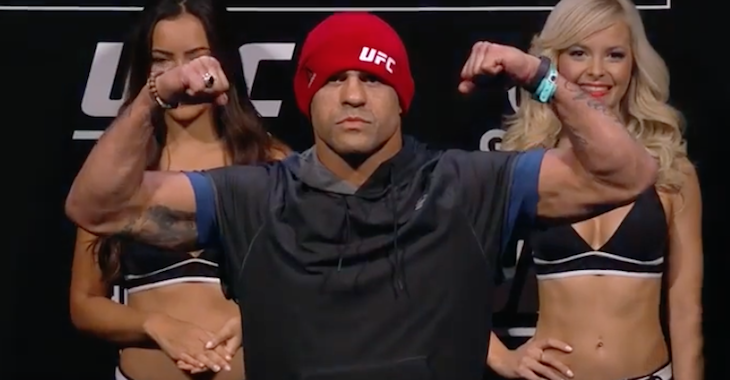 Round one begins and Vitor lands a leg kick to start things off. Marquardt comes forward and engages Vitor in the clinch. He scores a trip takedown and winds up in full guard. Nate with some shoulder strikes to get things started on the canvas. After a stall in the action, the referee steps in and stands them up. Belfort faints with a left high kick and then eats a low kick from Nate. Marquardt comes forward with a push kick to the body. Belfort circles and lands a left hand. He follows that up with a nice shot to the body. Marquardt circles out and then comes forward with a switch kick. Belfort is very relaxed here. Marquardt with a right hand and Vitor responds with a left for good measure. Nate scores with an inside leg kick. Belfort presses forward but doesn’t throw anything. He lands a body kick to end round one.

Round two begins and Nate lands an outside low kick early. He scores with another. Vitor gets in a left but then Nate connects with a combo. Vitor presses forward with a left hand. Nate appears to be stunned. Belfort immediately attacks with punches in bunches while Nate is against the cage. He lands a knee and then a left. Marquardt circles off the cage and appears to be ok. Nate presses forward and lands a left jab. Vitor fires off a hard low kick but eats a left hand from Nate. A little blood coming out of Vitor now after that last strike. Nate comes forward and lands a pair of low kicks. He misses with a high kick. A beautiful body kick lands for Marquardt. Vitor circles and then presses forward with a left hand. He goes to the body with a hard kick. Marquardt adjusts and then lands a front kick to the body of Vitor. The horn sounds to end round two.

Round three begins and Vitor gets things started with a nice left hand. Nate circles out and then comes forward with pair of kicks, both of which land. Vitor comes in with a kick of his own. Nate fires off a right jab that just misses. Both men are showing a lot of respect here. Nate with another kick that lands to the body of Vitor. Belfort needs to get busy here. He eats another low kick and then one to the body. Marquardt lands a right jab and then circles out. Belfort really needs to get going here. Nate lands a left hook followed by an elbow. Vitor finally scores with a right hand. He comes forward with a combination and then a hard kick to the body. Nate fires off a left jab and then circles off the fence. Another good body kick from Vitor. He seems to have come alive now. A good right hand from Vitor now. Nate shoots in for a takedown but Belfort sprawls and defends the shot. Another right hand from Belfort followed by a high kick that is partially blocked. Belfort goes to the body and then the head with punches. Marquardt presses forward and eats an uppercut from Belfort. Round three comes to an end.