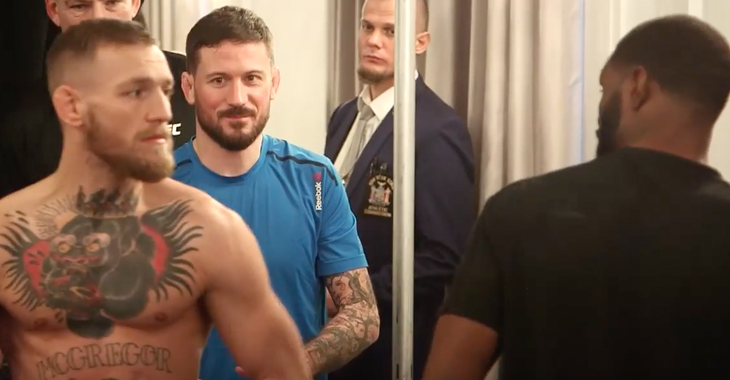 By now, it’s common knowledge that Conor McGregor let some choice words fly after his right hand hand Artem Lobov lost to Andre Fili at UFC Gdansk. It’s by far no the first time McGregor has said something controversial, but it seemed like it was the last straw with some people and turned into the biggest story of the card. It’s worth it to note that the UFC champ champ has since released a public apology, but that isn’t enough for Tyron Woodley who thinks he’s gotten way too many passes as it is.

“I’m fired up about Conor McGregor. He was using homophobic slurs. How many passes do we give this dude? That’s like the person that drops the ‘N’ bomb and says ‘I’m not racist, I’ve got three black friends and I had them over for dinner last night’. I gave him a pass during the Floyd Mayweather fight. He was using the term ‘boy’ [and] ‘monkey, words that have had very, very negative racial undertones in the past but I’ve got a problem with this. When you’re a celebrity of that stature and you’re making that kind of money, you need to have a PR person on staff and you need to have a bit more of a social conscience when you’re saying things.”

“You know cameras are going to be on you at all times. He don’t get a pass on this one from me. We’re in a different society now. Everybody should be treated equally and you can’t do that. With that said, no, for me you’re not getting a pass. Now Conor McGregor’s evolved, he’s a businessman, I would never hate on him for the things he’s done for the sport and for himself but with that said much is given, much is required. You do not get a pass from me, brother. He needs to sit down and be humble.” — Tyron Woodley speaking to TMZ.

Sometimes due to the UFC still being looked at as a niche sport of cage fighting, we write people off for their behavior due to, well, them being people who fight in a cage. However, the sport isn’t that small anymore and Conor McGregor surely has elevated himself beyond the realm of a street fighter who gets paid to do it. Tyron Woodley is right, McGregor is a gigantic public figure now and he’s subject to more scrutiny than ever before. His brash personality comes with his manic persona, we’ve accepted that and his fans love it, but there’s no reason to not be socially conscious.