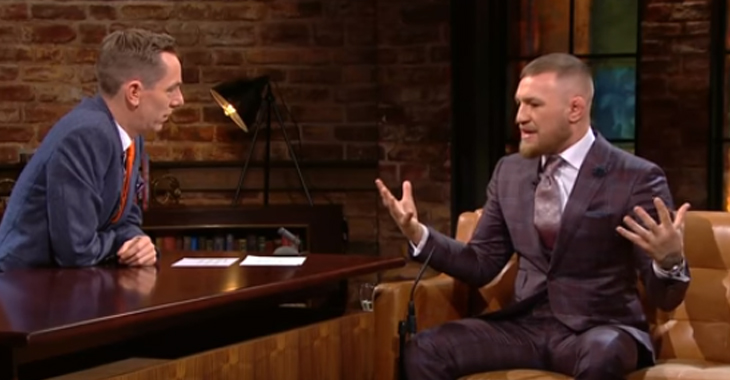 When Andre Fili bested his training partner Artem Lobov at UFC Gdansk, most of the eyes were on Conor McGregor screaming his voice out cageside. However, even more attention was drawn towards  the champ champ after the fight was over. BT Sport and UFC Europe both deleted video of McGregor walking Lobov back to the locker rooms using some questionable language, but the internet is forever. Neither organizations have commented on the slur, but McGregor recently issued an apology on RTE’s The Late Late Show.

“I had to put my hands up there. I was watching [Artem Lobov] — a sparring partner, training partner, a friend, a brother — of mine who has given his health — his body health, his brain health, everything — to help me prepare for fights. To give my brain health and my body health to entertain the public. So, that’s the fighter I was going to watch and support. I witnessed him lose a potential career defining or career ending fight, in manner where the opponent was stalling and running away and I was upset.”

Not sure what the future holds dont want to be retiring & coming back a thousand times. Will think about the futue & update.Thank u all 🇮🇪🇷🇺

“I was whispering in his ear and I was thinking on that, I said what I said and I meant no disrespect to nobody of any LGBTQ community. I didn’t mean no disrespect for that. You’d swear I was screaming at two people of the same sex kissing. I campaigned when we were trying to get same sex marriage legalized. I was campaigning for that. Again, it’s another one where things get blown out [of proportion]. Any chance they get, they love to just throw me under the bus. I just have to say sorry for what I said, and try to move on from it.” — Conor McGregor speaking to Ryan Tubridy on The Late Late Show.

This incident didn’t fare well for Conor McGregor, especially given his long track record of controversial statements. Accepted or not, good on McGregor for owning up to his mistake and apologizing for his words against Andre Fili. Back in 2015, the UFC lightweight champion did campaign during Ireland’s gay marriage referendum to vote yes for equality. Even calling a law against same sex marriage ‘stone age sh-t.’

Myself and my team are urging everyone to please VOTE YES TO EQUALITY! Every human deserves equal rights #WeAreAllOne pic.twitter.com/PbyTXNHzKQ