To say that last month’s No. 1 spot lived up to the hype would be an understatement. Here’s to hoping July gives us those same amazing moments.

Few months in recent memory have been as jam-packed with as many world-class competitors as July 2018 and it will be a complete shock if we aren’t treated to great action week in and week out.

With that said, let’s see what’s in store for Summer’s middle month in the MMA world. 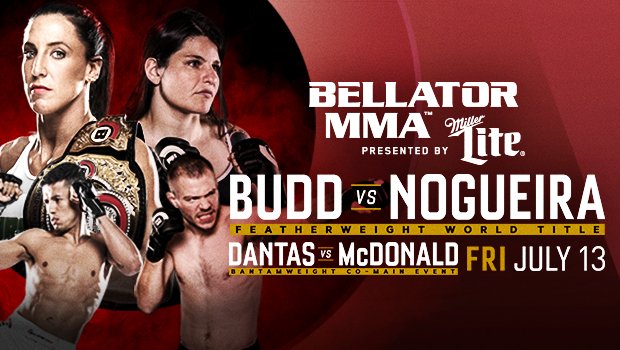 Starting things off on this month’s top 5 is a fight that very easily could have been a Bellator title fight at this time a year ago.

Dantas has proven to be one of the division’s best since he arrived in Bellator in 2011 when he knocked out current top-ranked UFC flyweight, Wilson Reis in the second round. Going 10-2 in the promotion since then, the Brazilian plans on continuing to prove he’s still one of the best.

Standing in “Dudu’s” way will be no pushover at Bellator 202. Ready to make his sophomore Bellator appearance will be “Mayday” Michael McDonald.

One of the UFC’s standout prospects at the beginning of their introduction to the lighter weight classes, McDonald stood out for his phenomenal power.

After a plethora of injuries added some unnecessary setbacks along with feeling he wasn’t being treated fairly, McDonald found his way out of the UFC and into Bellator where he would defeat Peter Ligier in his debut but break his hand in the process.

It was a comfortable win for the former UFC title challenger but it won’t get any easier from here.

Dantas will present the former UFC title challenger, McDonald with a similar challenge to that of what Renan Barao did. A technical and calculated striking approach along with the ability to submit if the fight goes to the ground. Big difference here is that Barao’s takedown defense is much better than Dantas’ but that isn’t saying much considering how great Barao’s defense is in that aspect.

The fight will be a fun test for each man as they look to work towards the gold.

His next opponent, Jeremy Stephens has begun to grow more accustomed to five round affairs in 2018 but with UFC on Fox 30’s stacked lineup, it just wasn’t meant to be.

None the less, it should still be a fantastic fight between two of 145’s best and it may not even go the distance anyway so mentioning those two extra rounds could have been pointless.

Being the top dog for most of his career, Aldo is now on a losing skid with two straight (both to Max Holloway) and having lost three of his last four.

Stephens, on the other hand, has arguably gained more momentum in his last three fights than he has in his whole career with his win over Gilbert Melendez followed by his knockouts of Doo Ho Choi and Josh Emmett.

This is sort of a make or break fight for both men as Aldo wants to show that he is still able to hang at the top of his division while Stephens wants to make that final push into title contention.

Stylistically it’s an incredibly interesting matchup as Stephens is the heavy-handed producer of violence while Aldo is a quick stinger with every shot he throws.

Their first meeting was one of the more wilder ones in the Bellator featherweight division’s history and there’s no reason to believe that their rematch won’t be one either.

After an incredibly troublesome opening round for the champion, Patricio Pitbull that saw him essentially saved by the bell with Daniel Weichel hurting him badly, the second round did a complete 360.

Knowing that he had the champion in trouble, Weichel would quickly put the pressure back on the champion. Unfortunately, after the massive success in round one, it wouldn’t continue in the second as Pitbull would catch Weichel with a big left hook that put his lights out just 32-seconds into the second round.

This fight remains as Weichel’s only loss in the Bellator cage and he’s won four straight since increasing his record in his last 12 to 11-1.

After a thrilling and competitive best of four series with former champion, Daniel Straus, Pitbull capped their fourth meeting off in the most impressive fashion of the previous three when he submitted Straus with a guillotine in just the second round.

Pitbull has proven to be one of Bellator’s very best fighters in the organization’s history and his most records for wins (14) and finishes (10) proves that.

What makes this rematch so fun and compelling is the trouble that Weichel was able to get Pitbull in the first time around as it was the closest we’d seen him to being finished in his 30 fight career. Especially when his three of his four losses have come by close decision losses (two split, one unanimous). The other being the freak injury against Benson Henderson at lightweight.

Another rematch! And a damn good one at that.

After their first fight that was ended by controversy, Dustin Poirier and former UFC, Bellator champion, Eddie Alvarez didn’t get to immediately settle the score. Instead, they had to get through wars with Justin Gaethje.

In a war of their own the first time, the fight saw Poirier getting the better of the former champion soundly in the early going. It wasn’t until the middle of the second round that we really started to see Alvarez retaliate and put himself directly back in the fight despite it appearing that he was out of it.

Ignoring the disappointing ending that came via illegal knee strike, it was a fantastic fight that we all wanted more of. And now we’ll potentially be getting five extra rounds with the winner possibly staring at a title shot.

Yeah! That’s right, we’re doing a little bit of cheating this month with two No. 1s. But if any month warrants it, it’s this one…you already know what the other choice is.

It will be the first super fight between light heavyweight and heavyweight champions in the organization’s history. It doesn’t get much better than this, folks.

Prior to Cormier’s reign at 205 pounds, he was 13-0 as a heavyweight. Many saw potential in him to become the champion in MMA’s heaviest division, but his best friend and longtime teammate, Cain Velasquez was also a division staple.

Now we get to see if the claims were reasonable.

Standing in DC’s way of creating history will be the continually doubted kingpin of the big men, Miocic who has defended the title more than anyone in UFC history.

Each fighter will be their toughest to date (with the exception of Jon Jones for Cormier). In a way, it’s a bit of a striker vs grappler matchup with Miocic’s seemingly unmatched boxing and Cormier’s Olympic level wrestling. But putting it that way would be a disservice as each has championship level skills in all areas.

It’s a once in a lifetime kind of fight and one you definitely will not want to miss it.

In terms of headliners and just fights in general…it literally does not get any better than UFC 226’s main and co-main event title bouts.

We’re getting the best of both worlds with a true super fight accompanied by the pinnacle of prime championship caliber athletes vying for supremacy. The latter equaling UFC featherweight champion, Max Holloway vs Brian Ortega.

Clear cut, two of the best fighters in the world today, these two have been unbelievably impressive in their runs to the top and this fight will be a perfect example of an unstoppable object vs an immovable force.

Both fighters have some of the very best fight IQ and fighting instinct. Ortega is known primarily for his incredible submission skills but over time has proven that he’s an overall threat wherever the fight takes place as evidenced by his knockout of Frankie Edgar.

Holloway being the more cerebral striker of the two has proven to be a puppet master with how he gets his opponent’s to engage right when he wants them to.

Hungrier than ever to prove they’re the best at what they do, this fight should be unbelievably tense and just a constant struggle for dominance. Someone’s got to give…but who?