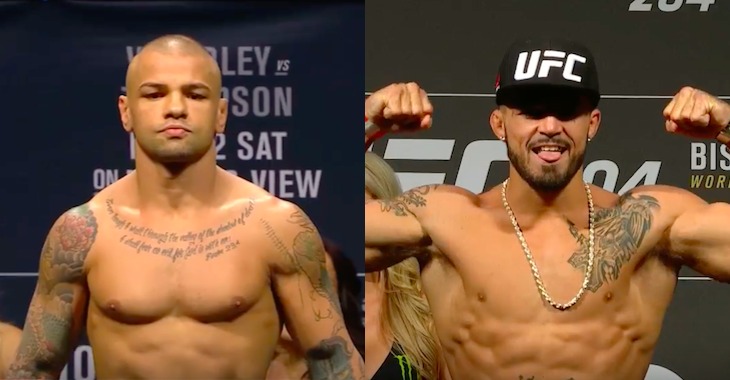 Last month, on the main card of the UFC’s latest trip to Nashville, Tennessee, hard-hitting welterweight “Platinum” Mike Perry authored one of the most violent knockouts in recent memory, flatlining Jake Ellenberger with a slicing, second round elbow.

In the wake of this career changing win, Perry used his elevated station to call out several of the welterweight division’s top players, including one-time welterweight title challenger Thiago Alves.

“There’s lots of fights [I’d be interested in],” Perry said on a recent episode of BJ Penn Radio. “I’m right ahead of Thiago Alves [in the rankings] and I’ve been a long-time fan of his, and I think that that would be a crazy fight that the fans would like.”

While this callout was initially followed by silence from Alves, the dangerous Brazilian striker has now responded, telling ESPN that he’d love a fight with Perry.

“I think Mike Perry would be a good fight,” he said. “He’s hot right now. He’s had a few big, impressive wins. I’m always down to throw with anybody, but that fight would make sense and fans would love it. Mike has said he’d fight me as well, and that it would be a good fight between us. I agree with him.”

Alves also said that he’d be up for a fight with top-10 welterweight Neil Magny, though he admitted that “everyone wants to fight Neil Magny right now,” and that the matchup probably wouldn’t be as fun. Whoever he fights next, Alves went on to to explain that, at this stage of his career, every fight is make-or-break.

“I’m in a position where every fight really counts,” Alves said. “It’s always been do-or-die for me, but now more than ever.”

Who do you think would win a fight between Mike Perry and Thiago Alves?